Uganda Cranes has been ejected from the African Nations Championship (CHAN) tournament after conceding to a late goal from Namibia on Thursday evening ending the game 1-0 in favour of Namibia.

Cranes who started the game on a high note created many chances including Allan Kyambadde’s cross in the 15th minute which went inches off target.

Uganda dominated possession with many shots on target despite both sides ending first half goalless.

Isaac Muleme almost gave Uganda an early second half lead through his corner kick in the 48th minute only to be cleared away by Namibia’s defenders.

Milton Karisa’s cross in the 55th minute from the right flank found Derick Nsibambi but his shot was saved by the Namibian keeper goalkeeper, sliming Cranes goal of scoring a goal.

Uganda’s coach Sébastien Desabre introduced Mucureezi for Saddam Juma and Ssenkatuka for Allan Kyambadde before his defender Timothy Awany got a red card in the 76th minute, reducing Cranes to 10 players.

From Group B, Zambia and Namibia each with 6 points having qualified for the quarter finals, and will face each other on January 22 in their last group game.

Uganda and Ivory Coast who are at the bottom of the group will face off on the same date before travelling back home. 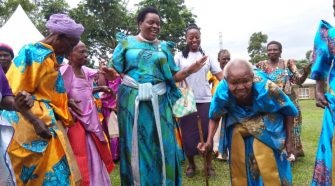