Addressing the media at PSFU offices in Kampala on Wednesday, the Executive Director, Gideon Badagawa noted that there is shrinking market for Uganda’s goods in the region thus a need to look inward and build the capacity of local people to consume the produced goods.

Badagawa said that a number of factors have contributed to the shrinking market, citing the Ebola outbreak in DR Congo, the closure of Rwandan borders as well as the conflict in South Sudan.

The PSFU boss noted that there is weak purchasing power among the population which limits business’ ability to expand, diversify and employing more people directly or indirectly.

As such, PSFU has devised measures which will improve purchasing power and create wealth through.

The expo will have sessions on retirement planning, through sharing available business opportunities; business linkages in the various value chain of agriculture, tourism, among others, trade facilitation activities, training and skilling of MSMEs.

Badagawa said the PSFU 14th Trade Facilitation Expo which will take place from November 12 to 14 at UMA showground in Lugogo will showcase the business opportunities to both existing and potential business persons, companies and organizations.

“This target group will be matched with big companies for opportunities, organizations for skilling and further support by trade facilitation institutions,” Badagawa said.

It will also support the retirement management institutions such as URBRA, NSSF, Ministry of Public service & Wazalendo SACCO for better planning.

“Several of these middle class persons experience high dependence both at work stations and rural stations. These are highly respectable people in society and if supported could easily be used as change agents to support others.” Badagawa added.

He noted that the trade expo will be officially opened by President Yoweri Museveni as a champion of industrialisation, value chain development and socio economic development.

During the same period, PSFU in conjunction with Promote Uganda will hold the first annual Machine Exhibition to showcase technologies from across the world that can be used in the value chain development.

The Executive Director Promote Uganda, David S. Nsubuga said that the machine exhibition is organised with support from Baikegang International Exhibition Company Limited from China and the Ministry of Foreign Affairs.

“We have already assembled a number of machines and this will given participants in the trade show an opportunity to interact with the technologies they can employ as well as machinery,” Nsubuga said. 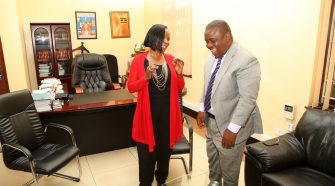