At least 36 suspects have been arrested and 112 people rescued including women and children in an operation by security agencies to crackdown on suspected criminals.

New details on the operation that was conducted by CMI, Police and other agencies of security on Friday night indicate that 18 women who are suspected to have been kidnapped or held hostage were found in the Usafi mosque in Kisenyi, downtown Kampala.

The same operation also saw a total of 94 children rescued.

In a statement released on Saturday afternoon, Police spokesperson, Emilian Kayima says that the women and children are suspected to have been either kidnapped or held hostage at the mosque.

According to the statement, the operation was part of leads in the investigation of the abduction of former accountant, Susan Magara and her eventual brutal murder in February this year. On Friday night, the security operatives were led to Usafi mosque by one of the suspects in Susan Magara’s case where they would later discover exhibits of alleged criminal activity.

“The operation at Usafi mosque in Kisenyi where 18 women and 94 children of various nationalities were all rescued unharmed,” the statement read in part.

Kayima said that several weapons “used in committing heinous crimes” were seized during the crackdown. In the mosque, security operatives recovered 60 rounds of 7.62mm ammunition, 23 double edged machetes, 1 bow and a laptop.

“The security forces take exception of the fact that such a place of worship could be used under the cover of sanctity and freedom of worship to plan and execute crime,” the Police said in its statement.

According to Kayima, the mosque at Usafi will continue to be secured and restricted.

The 36 suspected criminals are reported to be in the custody of Police. Neitheir their identities nor where exactly they are being held has been revealed, but Kayima said they are yet to record statements.

Police says there other suspects liked to the recent kidnaps and murders that are highly wanted. Authorities have asked the public to volunteer information in case they know of any suspects. 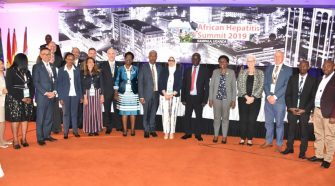