Police have arrested two Police officers along with a member of a village defence unit who reportedly beat up a pregnant woman. They had accused the pregnant woman of flouting orders against crowding in bars and public spaces.

The arrest followed a directive by President Yoweri Museveni after he received reports of the alleged beating and torture of Mercy Nakate.

On Friday, the President directed Lt Col Edith Nakalema who heads the State House Anti-corruption Unit to receive complaints from  public regarding security personnel who will be found to be abusing the implementation of the guidelines on Covid-19.

Nakate, 23, a resident of Busega, Kibumbiro Village, Busega in Rubaga, Kampala, was reportedly beaten on March 27 by a group of policemen and village defence unit officials who were conducting a patrol.

According to Nakate, who is seven-months pregnant, on the fateful night she had moved out of her house to buy a herb (emumbwa) when rain forced her to seek shelter at a common makeshift socialisation facility used by residents.

“It was then that the policemen who were on patrol found us and immediately began beating us. The other people ran away but given my condition I could not run. They descended on me, hitting and kicking me despite my cries for mercy,” she said.

Her colleagues later came and helped her get back home. The following day, she went to report the case to the nearby police station, but the officer in charge instead convinced her to drop the matter in exchange for medical support.

However, the President got to learn of the incident and Friday directed Lt Col Nakalema to investigate the matter.

Subsequently, detectives led by SP Jackson Tweheyo, were dispatched to Kibumbiro Village, causing the arrest of Constables Francis Mpande and Noah Massajjage, who were in charge of the patrol exercise.

Also arrested is Asiimwe Junior, a member of a village defence unit.Police Spokesperson Fred Enanga confirmed the arrests, saying the suspects are detained at Nateete Police Station as they await to be charged.

A one Edirisa Kitooke, a Parish Intelligence Security Officer (PISO), and another only identified as Ndawula, who were reportedly part of this operation are said to be on the run.

On the directive of President Museveni,  Nakate was taken for further medical examination and care by a team led by the Director Police Health Services, Dr Moses Byaruhanga.

They will attend to her until she gives birth.Nakate thanked President Museveni for picking interest in her matter and supporting her.

“I am very grateful to the President for supporting me. I am actually thinking if my baby is a boy when I produce, I will name him Yoweri,” she said.

Addressing the country on Friday, President Museveni warned law enforcers, especially the local defence units, against assaulting and beating people they found out during curfew hours. 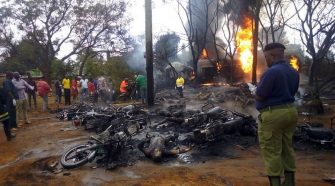