With just hours to reach the end of 2018, Ugandans have concrete reasons, which are rather sad, others worrying, to celebrate the climax of the year, which has been constituted by not only fateful, but also, tragic moments.

The country has witnessed devastating and ill-starred junctures, ranging from gruesome murders to election violence, fires, accidents massive land evictions, corruption as well as deadly mudslides in the eastern part of the country.

Let us flash into some of them;

Lake Victoria tragedy tops the list of the deadliest happenings of 2018 and it will live to be remembered.

It was reported that a boat, MV Templar, carrying people estimated to be more than 100, capsized and killed dozens of patiers who were on a boat cruise. On board was musician Iryn Namubiru as well as Prince David Wasajja, brother to Kabaka of Buganda, and businessman Kiyimba Freeman who all survived.

Reports indicate that 27 people survived and 33 bodies were retrieved.

History will have it that 2018 saw a number of high profile individuals in the country, murdered in cold blood by people allegedly moving on motorbikes, and also women kidnapped by unknown people, some of whom, would demand money and eventually kill them. We will look at a few.

The body of the 28-year-old accountant, Susan Magara, was found dumped in Kigo, off the Entebbe expressway on February 28. It was reported that she was kidnapped on February 7 as she drove to her home in Lungujja.

The kidnappers were reported to have contacted her parents for money as a ransom before ending her life. Her murder caused unmeasurable fear amongst Ugandans.

Her demise is yet another saddening story as she was said to have been kidnapped by unknown people who pretended to be taxi operators on May 5, in the old taxi park and later use her phone to contact her parents for Shs10 million.

The 22-year-old YMCA student would later be murdered and her lifeless body dumped in Mutundwe, Kabawo zone, Lubaga division.

Known for his love for the ruling, National Resistance Movement (NRM), and his trademark yellow Volkswagen Beetle vehicle, former Arua municipality MP, Ibrahim was gunned down together with his bodyguard/brother, Saidi Kongo Buga, near his home in Kawanda on June 8.

On the fateful day, he was headed home at 7pm when assailants allegedly riding on motorbikes unleashed bullets on his car, ending life of a man described by many as calm and friendly.

Formerly in Buyende district and Nansana as DPC and OC respectively, the youthful Police officer was as well shot dead near his home in Bulenga trading centre, Wakiso district, still by assassins allegedly on motorbikes.

He was killed alongside a female occupant in his car. The style of his murder was synonymous with the killing of former Police Spokesperson, AIGP Andrew Felix Kaweesa, who was also gunned down near his home in Kulambiro on March 17, last year.

The Electoral Commission had to organize by-elections for Arua Municipality MP seat on August 15, after the demise of the late Ibrahim Abiriga.

The election which was anticipated to be peaceful, turned rowdy at the closure of the campaigns, when supporters of Kassiano Wadri, candidate backed by MP Robert Kyagulanyi alias Bobi Wine, allegedly pelted stones at the President’s motorcade, breaking the rear window of one of his cars. President Yoweri Museveni was in the area, to solicit votes for the NRM candidate, Nusula Niperu.

The violence Bobi Wine and other 34 people beaten allegedly by security. They would later be charged with treason.

Whereas Wine and MP Francis Zaake went abroad for specialised treatment, some victims can not support themselves to walk up to date. The ugly incident also claimed life of Kyagulanyi’s driver, Yasin Kawooya.

At least 22 people perished in a nasty motor accident on May 25 at Nanda village near Karuma town, in Kiryandongo district. The accident involved a Gaaga bus, cargo lorry and a tractor.

Another related event occurred two weeks ago on December 18, when at least twenty people also perished in an accident that occurred at Towei hill in Sipi town council, Kapchorwa district.

It will be very hard for Ugandans to forget the fresh mudslides and landslides that swept over five villages on October 16, in Bukalasi sub-county, Bududa district and killed at least 17 people.

Bududa had experienced similar occurrences in 2010 when an estimated 350 residents Nametsi parish, were buried.

As land continues to be one of the causes of conflict in Uganda, the poor and underprivileged residents in Namasole Bagalayaze zone in Lusanja, Wakiso district, were left in tears and homeless, when men working on orders of a one Medard Kiconco guarded by Police, demolished their houses on October 12.

Kiconco claimed that he had bought the estimated 9 acres of land, and had a backing of an order from the Nabweru Chief Magistrate’s court, to evict the residents.

High Court has since ruled that the Chief Magistrate’s Court at Nabweru had no authority to order the eviction.

November 11 was yet another dark day, this time at St Bernard Secondary School, Manya in Rakai District, when fire broke out in a dormitory housing more than 50 senior three students, killing at least 10.

Mattresses, suit cases, clothes and books among other scholastic materials, also got destroyed in the fire.

These and many other dreadful events characterised the year 2018, and will take time to fade in the minds of Ugandans, most especially the victims and relatives of affected.

As we usher in 2019, the prayer of every Ugandan should be having a better year that is free from such unpropitious and regrettable incidents. 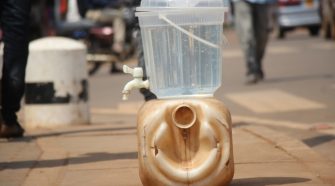 PICTORIAL: How is Gulu Coping with the Covid Threat?