Uganda Revenue Authority (URA) has seized two pieces of elephant tusks from suspected smugglers after bursting an illegal trade deal. The elephants tusks are said to weigh 38.8 kilograms and are valued at USD 38,800 (Shs 136.8 million)

The seizure followed a tip off to authorities at URA that three persons in Lira suspected to be ivory smugglers were looking for prospective buyers for their products.

The trio claimed to have ‘goods’ with them and they were ready to trade at USD 1,000 per kilogram preferably to a foreign “investor”.

Having learnt about the trade, the URA enforcement team went under cover disguised as representatives of a foreign investor called “CHANG” one member as an expert to verify the goods and another as the executor of the deal. This was followed by a strong back up team to monitor the deal.

When the negotitations were near Having conclusion, the back up team came swang into action and arrested the three suspects. The vehicle Reg No. UAK 099B in whose trunk the ivory was concealed was also seized.

In Uganda, elephants and rhinoceroses are among the most poached animals given their ivory which is highly valued on the black market. 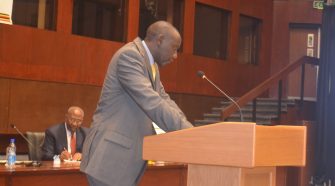