Police have arrested three people as they walked to Parliament to deliver a petition to the Speaker, Rebecca Kadaga, challenging what they say is the abuse of rights against ailing Mukono municipality MP, Betty Nambooze.

The three who were led by a one Habib Buwembo were roughed up and forced onto a police pickup on Monday morning near the Parliament gate in Kampala. They were then driven off to Central Police Station (CPS) in Kampala.

The other two have been identified as Juma Kabotongo and Yasin Galiwango. They are likely to be charged with offences relating to being a public nuisance, according to Police.

Earlier, while they walked towards Parliament, Buwembo told journalists; “Today, we decided to lodge a petition to the Office of the Speaker about the life of Hon Nambooze which is being mistreated and treated in a manner we don’t agree with”.

“The Speaker knows that Hon Nambooze is a worker of Parliament and she has the rights that protect her life,” Buwembo added.

Buwembo and his colleagues were escorted by a few police officers who upon reaching the entrance of Parliament insisted that only one of them would be allowed access to Parliament to present the petition.

However, no sooner had the three selected a representative than a Police pickup filled with officers arrived and without further negotiations, dragged the three petitioners on the waiting pickup.

The officers could not listen to their pleas regarding the earlier permission granted by other police officers.

Betty Nambooze has been admitted at Kiruddu hospital for nine days now since June 16. She was transferred to Kiruddu from Nagalama police station where she was being detained over offences connected to offensive communication. Her health had deteriorated while in police custody.

In their petition, the three arrested individuals claim several of Nambooze’s rights have been violated.

They cite Article 28 (1) of the constitution which provides for a speedy and fair hearing before a competent court, Article 23 (2) which provides for equal opportunities and enhancement of women and Article 24 which guarantees human dignity and protection from inhuman treatment.

“All the above provisions have not been respected and we do hereby petition the Rt Hon Speaker of Parliament to intervene and save the life of Hon Betty Nambooze Bakireke,” read part of the petition.

The say the legislator’s life is in danger and that she is likely to suffer death. 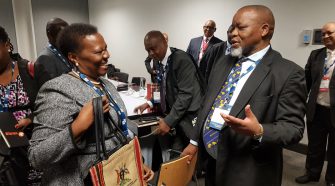