KISORO – Three people have been confirmed dead following landslides that hit parts of Kisoro district this week due to heavy rains.

The heavy down pour hit the villages of Mugombwa and Bikokora in Nyabwishenya sub-county in Kisoro district.

At least 40 households were destroyed by the impact of the landslide, 15 in Bikokola village and 25 in Mugombwa, Uganda Red Cross told Soft Power News on Saturday.

It followed a Joint Assessment on the impact of the landslides, made Friday by Red Cross and the Kisoro District Disaster Management Team.

The Kigezi region police spokesperson, SP Elly Matte said that 5 people were washed away by landslides on Wednesday and that so far, all the three dead bodies have been recovered.

“We recovered three bodies of people who were washed away by landslides as a result of heavy rains that washed them to Rubatsi River,” SP Matte said.

The deceased have been identified as Richard Ngabirano Richard, 17, who was grazing goats, Oliver Nyiramutuzo, 28, and Flora Nyamishana, 36, from Mugambira village.

They were weeding millet at the time of the heavy down pour and the landslides swept them into the river.

Matte said a woman and a three months old toddler were rescued from the river after the incident.

Those rescued were identified as Sylvia wife to Stanley Balitonda who was rushed to Nteko health centre and a three months baby daughter to Flora Nyamishana who was taken to Poters village health facility.

Ronald Kanyerezi, the Branch Manager for Uganda Red Cross in Kisoro district told this news website that the landslides resulted from heavy rains that lasted three hours. He said that two of those dead were both women from Mugombwa village while the dead boy who had just completed his Primary Seven (P7) was from Bikokola.

The displaced persons from the 40 affected households are currently being accommodated in the different households in the neighborhood as an interim intervention, Kanyerezi said.

“We are liaising with the District to get the relief required because the homes where these people are being hosted are not in good condition. They are in makeshift structures and they are not comfortable,” he said.

Given the hilly terrain of the area, he said, it has been difficult to locate a school facility where the displaced families can be placed in the mean time.

Kanyerezi explained that the human settlement on the steep slopes and the soft nature of the earth makes the residents in the affected areas prone to landslides whenever it rains.

So far, government has not provided any relief to the affected persons.

This week, Uganda Red Cross launched an appeal for Shs 1bn in support to enable the humanitarian organization respond to disasters in the districts of Kisoro, Kasese, Bundibugyo, Kabale and Rubanda which have recently been affected by heavy rains.

The Police spokesperson advised people in Kisoro to always stay away from hilly areas as one way of avoiding natural calamities that claim their lives.

“It’s very unfortunate and we are feeling sorry for. Although its beyond our control, we advise our people that once heavy rains find them in the valleys or on slopes of hills, they should always take care,” said Matte. 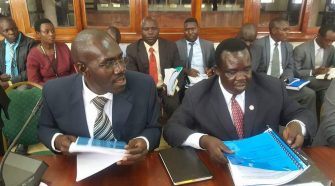