Court in Kampala has charged four suspects (including a councilor and security guard) in connection with the murder of Tegu Emmanuel, a student at Makerere University.

Tegi, 24, was violently beaten on June 27 and sustained life threatening injuries, which he eventually succumbed to on July 3  at Mulago Hospital, Kiruddu.

Police said in a statement that the actions of the four suspects were supported by the post mortem report which revealed the cause of death as blunt force trauma, due to open wounds along the back, multiple cane marks on the back of the right elbow and abrasions along the abdomen and the entire back of the victim.

According to Police, facts indicate that on June 27, Tegu left his sister Rachael Ariongeti’s home, at Namungoona where he also stayed with his brother Sam Okwalinga, and proceeded to his church at Makerere.

“He did not return home, but in the evening at around 10pm, he was found by PC Mukose Farouk who was on routine patrol behind the main building near the water tank,” Police spokesperson, Fred Enanga said in a statement.

“The officer attempted to inquire about who he was and what he was doing at such an ordinary hour, out in the cold. He appeared erratic and responded by throwing stones at the officer, who fired three shots in the air to scare the victim but kept charging at him. This forced the officer to withdraw and communicated to his supervisor”.

Police says the victim ran towards St Augustine church and Centenary bank, where he charged at the three private security guards but was overpowered.

“They hit him using the metallic chairs from the visitor’s tent, and it’s at this stage that he cried out for help, which attracted about 10-15 residents from Zone 1 and West road quarters around Lumumba hall. Among the responders were a few youth who joined the private security guards and violently assaulted the victim, whom they suspected to be a thief”.

Enanga says it is after the intervention of the Chaplain, St Augustine Church Makerere that the private guards and the few charged residents stopped torturing the victim and alerted the police about him.

Police says about three private security guards of SGA and seven others, who responded to the alarm, were behind the violent assault of the victim.

“The scene was reconstructed and a few key pieces of evidence including CCTV footage from St Augustine Church, metallic chairs from the visitors’ tent at the banks which were used as a weapon against the victim, a wire rod and relevant witness statements recorded”.

Three more suspects are still at large, and Police says it has clues on them.

Meanwhile, Police has refuted claims that it blocked media requests to access the CCTV footage provided to Police by St Augustine Chapel.

“We do advise them to liaise with the church since it is a private footage, and also with the family of the deceased, since the public display of the images could be very disturbing. The copy retrieved by police has been taken in evidence and exhibited”. 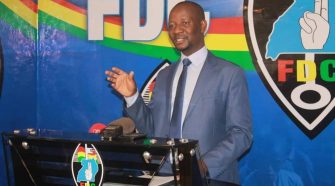