Forty five Rwandan refugees, who have been detained by Uganda Police Force at Nalufenya for weeks have been charged with terrorism and remanded to Mbarara Central Police Prison until January 15.

The refugees were on Thurday evening charged with three counts of terrorism and establishing a terrorist institution before Mbarara Grade 1 Magistrate Daphine Nayebare amid heavy police guard.

Prosecution alleged that the accused who include women willfully collected or provided funds directly or indirectly on December 11 with the intention that such funds would be used by persons to travel outside Uganda for the purpose of planning, perpetrating or preparation in or carrying out a terrorist act or providing or receiving terrorist training.

The refugees were also charged with forgery of documents “with intent to deceive or defraud.”

Court heard that the forty five and others still at large “travelled outside Uganda with the purpose of perpetuating, planning, or preparation of or participation in terrorist acts or providing or receiving terrorist training for political, religious, social or economic gain with due regard to the safety of others or property.”

Magistrate Nayebare did not allow the accused refugees to take plea arguing that two of the accounts on the charge sheet could only be tried by the High Court since they were of a capital nature.

“You are, therefore, remanded up to January 15 when you will be brought back to court for mention of your case,” Magistrate Nayebare ruled.

Earlier the Police spokesperson, SSP Emilian Kayima confirmed to SoftPower News that 43 of the accused were in police custody. It is not clear where from the two other refugees were arrested from to make the number of the charged 45.

Weeks ago, this website broke the news of the arrested refugees from Kikagati border in Isingiro district on their way to a Christian fellowship in Tanzania.

On December 11, the group set off from Uganda in a bus for Tanzania and had been cleared by immigration officials at the border. No sooner had they crossed into Tanzania than police authorities from Uganda stopped them and ordered them to drive back to Uganda.

Indeed the charge sheet reads in part that the accused “travelled outside Uganda…..”

They were later arrested, detained shortly at Isingiro police station in South West of Uganda and then detained at Rwizi in Mbarara district before being taken to Nalufenya police detention facility in Jinja district.

At first, Police had accused them of having ties with ADF but later when contacted by this website, Kayima said they possessed fake travel documents.

He had previously told SoftPower News that the refugees were headed to Burundi but this was not included in the press release issued by Kayima in which Police demanded an apology from the Daily Monitor for referring to Nalufenya as a dreaded facility in the story titled ’45 Rwandan refugees held over rebel links.’

The refugees production to court follows their lawyers’ petition of Jinja Chief Magistrate’s Court protesting continued detention of the accused beyond the 48 hours allowed by the law. 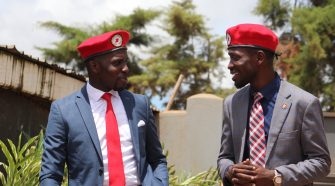