The Local Council five Chairperson of Gulu district, Ojara Martin Mapenduzi, some Gulu district officials and five journalists are in self isolation, after physically interacting with the Ministry of Health officials who have since tested positive for the deadly coronavirus disease.

On Tuesday May 26, two officials from the Ministry of Health visited Gulu district on activities related to COVID-19 and held a meeting with some district officials before hosting them on a couple of radio stations in Northern Uganda.

According to Mapenduzi who Friday spoke to this news website from a hotel room where he is isolating himself, the Ministry officials requested that he joins them for the radio talkshows after their meeting, something he accepted.

“That evening (Tuesday) 7-8pm, we were hosted on Speak FM in Gulu town. After the show, they traveled to Kitgum and Pader where they also held a number of radio talkshows before traveling back to Kampala,” explains Mapenduzi.

As one of the ways to ensure safety of its officials, the Ministry of Health carries out mandatory routine tests for its staff and as such, the testing was done this week on Monday including the two officials who had traveled to Northern Uganda and their driver.

“The results came out the following day Tuesday evening and one of them tested positive for COVID-19. So, as a precautionary measure, we decided that all of us go in self quarantine,” Mapenduzi told SoftPower News.

The people now under self isolation at their homes include the 5 journalists who hosted the officials and the district officials who held a meeting with them.

For the case of Mapenduzi and one of the District Councillors, they are self isolating from one of the hotels in Gulu.

“I decided to isolate in a hotel room in order not to subject my family members to fear,” says Mapenduzi.

He however says that from last week when they interacted with the Ministry of Health officials, until this week Tuesday when they got information that one of the officials had tested positive for the disease, they were interacting with their families.

Mapenduzi further reveals that samples were taken from them and expect results today (Friday). He however says he and his colleagues he communicates with have so far not shown any symptoms of COVID-19 despite being in the tenth day after the interaction.

“Everything is okay, there is nothing, actually for the case of this disease, you can begin to see symptoms between 2-14 days, we have finished ten days so far. The samples were taken and hopefully the results will be out today. In fact there is no cause for alarm because for me, this is an opportunity to rest a bit from my busy schedule,” he explains.

On Friday, the Prime Minister, Dr Ruhakana Rugunda announced that he had gone in self isolation after he also got into contact with people who have been diagnosed with coronavirus.

In a twee, Rugunda said: “Friends, I have gone into self isolation after some of my contacts tested positive for COVID-19. My own test result is negative, however, I have taken this decision as a health recommended measure.”

This comes after reports that all Ministers will be tested for the disease which has so far infected over 500 in Uganda.

On Thursday, the Ministry of Healthconfirmed a new COVID-19 case among health workers bringing the number of Health workers infected to 8.This comes after reports that all Ministers will be tested for the disease which has so far infected over 500 in Uganda.

Uganda’s total number of cases now stand at 557. There are no Covid related deaths in Uganda so far. 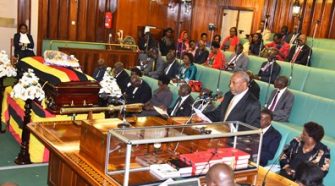