President Yoweri Museveni has supported the proposal to have the current constitutional tenure of Presidency increased from 5 years to 7 years saying African political leaders need more time to execute the enormous work.

He said that the 5 year term for one to adequately do their job was “a joke” and that it only serves to benefit those who only want to renew their political CVs rather than cause an impact.

Museveni said this while meeting with the Legal and Parliamentary Affairs Committee which was consulting him on the contentious Bill that seeks to repeal the constitutional Presidential age limits. The meeting was held at State House Entebbe on Wednesday.

He said that revising the 5 years to 7 years is appropriate in the case of Africa where leaders have much more work to do and need adequate time to develop the continent.

“For these countries with all these problems, two terms of five years is just a joke. Those who talk about this are just looking at improving their CVs,” Museveni commented.

This week, Arua municipality MP Ibrahim Abiriga hinted at a plan to introduce a Bill to extend the current election term from 5 to 7 years. Abiriga said discussions are underday to choose which Private member will table it in Parliament.

“We might not discuss it now but there is merit at looking at the seven years not just for President but even MPs. It would give some time to these young countries to develop. France has seven-year terms, I do not see what they have lost,” the President told the committee.

Regarding the issue of repealing the minimum (35) and maximum (75) age limits, Museveni said that he vouched for the Bill by Igara West MP Raphael Magyezi. He said that it is safer for Uganda not to be rigid “because you may get a capable person who is beyond 75 years and sideline him because of mere technicalities”.

“This is not about me. Why tie your hands when at some point you might need to be flexible? If you get younger people to lead, no problem, but it is better to not be rigid,” Museveni said.

The Committee chaired by West Budama South MP, Jacob Oboth Oboth also asked the President to clarify on an interview he gave to NTV years ago in which he categorically stated that he would not stand for President after he clocked 75 years of age. In the interview, he had explained that somebody beyond 75 might not be psychologically fit enough to be President.

To this, Museveni responded that politics was more about ideology and service than a sport where one needed to compete physically.

“Politics is not the Olympics or rugby where you need to compete physically. The Presidency is a guiding role,” he said.

President Museveni equally opposed the idea of reinstating Presidential term limits in the constitution saying that at its stage of development, Uganda’s biggest problem is not the lack of term limits.

“It took America more than a century and half while developing their economy and political class to put presidential term limits in their constitution. When they finally did so in 1947, everything they wanted had happened. They had developed, the colonies had integrated,” he said.

“But here; what has happened? In Africa you behave like we are running countries and yet we are creating countries.”

The MPs, through Hon Robinah Rwakoojo, the committee’s deputy chairperson, thanked President Museveni for according them audience, and indicated they would do a good job writing a report that captures all views picked from those they interfaced with. 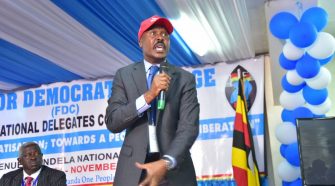