Police says 8 people have so far been arrested for their alleged involvement in the gruesome connection killing of a Muslim cleric in Bugiri district last week.

During a news conference on Monday, Police spokesperson, CP Fred Enanga said the task team actively investigating the murder of, has so far arrested 8 suspects.

The majority are said to be from one family “highly connected to the senseless killing”.

The suspects include a boda boda rider who allegedly transported the killers to and from the murder scene.

“According to preliminary facts, the shootings stemmed from an ongoing land wrangle with Koita Suleiman, also of Busimba village, ” Enanga said.

“They hired a boda boda rider who transported the gunman and another assailant. The lone gunman made his way to Sheikh Mutumba’s home, called him out, and shot him once to the head killing him instantly. he ran and joined his two colleagues on the boda boda and they escaped from the scene”.

Enanga said Police has directed all available resources to the investigation and the task force comprising of selected detectives from Homicide, Flying Squad and Busoga East Territorial Police.

These Units, he said, “are working diligently, and chasing down every lead”.

However, Enanga said the 8 do not include the prime suspect who shot the Sheikh. He said efforts are in place to apprehend this suspect, although he said his identity is already known.

“We would like to reassure the public that murder has no connection to his faith or to the killing of the Muslim clerics in 2016. They should also know that anyone found facilitating the prime suspect, by either sending him money or accommodation, shall be arrested and charged with being an accessory after the fact of murder”. 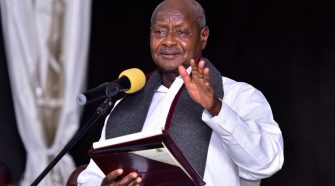