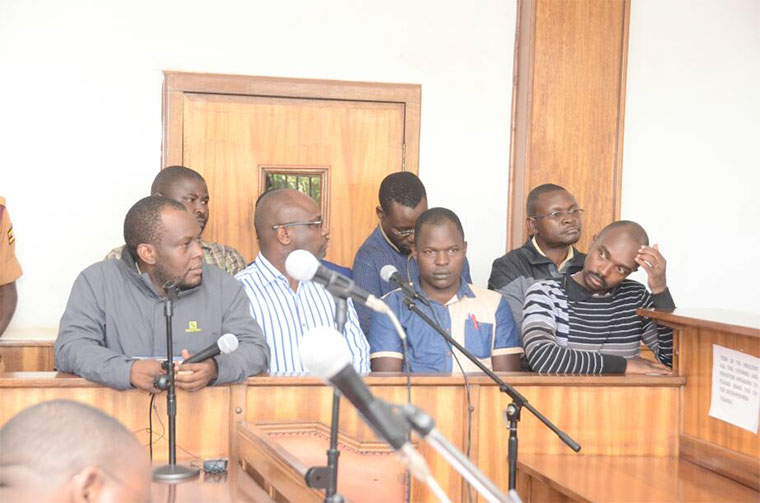 Court has Tuesday dismissed the case involving the Directors and staffers of daily tabloid, ‘Red Pepper’.

In a withdraw form written by the DPP, Mike Chibita to the Chief Magistrate at Buganda Road High Court, he stated that; “This is to inform court that the Director of Public Prosecution has decided to discontinue proceedings against Richard Tusiime, Johnson Musinguzi, Patrick Mugumya, and Arinatwe Rugyendo, Richard Kintu, Ben Byarabaha, Francis Tumusiime and James Mujuni charged with publication of information prejudicial, libel and offensive communication contrary to Section 25 of the Computer Misuse Act of 2011”.

The withdraw form is also copied to the Resident State Attorney, Buganda Road and the Regional CID Officer at the CID headquarters.

The seven directors and editors have been facing charges including defamation, offensive communication and publishing information prejudicial to national security.

These arose last year after the Red Pepper published a story on November 20, 2017 in which Rwanda claimed that President Yoweri Museveni together with his brother Gen Salim Saleh and the then Security Minister, Lt Gen Henry Tunukunde were plotting to overthrow Rwanda’s President, Paul Kagame.

A day after publication of the story, the newspaper along with its subsidiary companies were shut down and the Editors together with Directors arrested and charged. Police besieged the publication’s head offices in Namanve for two months.

In January, President Yoweri Museveni gave directives for Police to withdraw from the Red Pepper headquarters in Namanve.

This followed a meeting between President Yoweri Museveni and directors of Red Pepper in which the President reportedly agreed to end the Police siege on the publication’s premises and to allow Red Pepper and its affiliate media outlets to resume business.

Following lengthy formal and informal negotiations between the proprietors of Red Pepper and senior government officials, Museveni pardoned the accused Directors. This was after they presented an apology to the President, pledging not to publish anything considered prejudicial to security.