It’s been one year since Katuna, the main border of Rwanda and Uganda was closed by the Rwandan government. Beyond the political and diplomatic strife that the situation has resulted into, it’s primarily the local traders and the business community on either side that are bearing the brunt.

The closing of the border has caused a customs paralysis which has led to many business counting losses. The consequences of this are far reaching – social and economic.

In July last year, Uganda Revenue Authority (URA) reported that the closure of the Katuna border had seen a drop in exports for both countries.

Prior to the closure, the border at Katuna in Kabale district handled at least 4,800 trucks and small cars in a month. But this number fell to 700 after the route was closed by Rwandan authorities.

Uganda’s exports to Rwanda had fallen by 23 percent in the period March to July 2019 while imports from Rwanda to Uganda had equally fallen by 27 percent.

Four months ago, the Private Sector Foundation of Uganda (PSFU) placed the cost of the border closure at Shs 530bn (March to November).

He had earlier commented: “Time matters to businesses…. We are losing business in form of our own profits and jobs, investments are beginning to shrink. If you lose a market, then why would you expand? And this reduces the tax base and the two economies consequently lose”.

Uganda and Rwanda have strong historical ties, to the extent that Banyarwanda, many of whom fled Rwanda in the wake of the 1994 genocide and others earlier in the 50s, are recognized by the Ugandan Constitution as a tribe in Uganda. Many on both sides of the border have since intermarried while others have what’s more like dual citizenship in both countries.

But Rwanda’s closure of the border with Uganda has brought about a significant strife stifling social interaction, trade, education and economic activities like farming.

Miria Akankwasa Tugume is one of the people who have been affected considerably by the closure of the border. She is the Chairperson of the Katuna Women Cross Border Traders Cooperative, a body that brings together about 242 women.

“We have experienced a lot of challenges. Our businesses have come to a standstill. We no longer have money to service our loans and as a result, some of our women were jailed,” Miria opened up to SoftPower News during a recent interview on the sidelines of the Women’s Conference organized by Uganda Revenue Authority (URA) in Kampala.

She says the frustration in trade has forced many of her members to close shop and return to their homes with no options of fending for their families.

“We are not fine at all. Our children cannot go to school, we have failed to get school fees and healthwise, we are not doing well”.

Majority of these women were small scale traders and middle income earners most of whom sold merchandise on the Rwandan side. Some frequently carried baskets with bananas, onions and tomatoes while others dealt in agricultural produce. Others had wholesale outlets while others ran small kiosks on retail basis in the Katuna township.

The border crisis has also affected the property owners since most of the traders have closed shops and lodges which previously thrived on the buzzing activity and constant human movement, she said.

“When they closed the border, even us, we didn’t initially know what this meant. But Rwanda stopped every person as well as the business community from Rwanda to come to Uganda. And these people had our money. We used to give them our goods on credit, so when they were blocked from crossing to Uganda, these people remained with our money”.

She says that although Ugandans are free to enter Rwanda, carrying any goods is restricted. And for some Rwandans, this has cost them their lives as they were shot and killed by Rwandan security as they tried to cross into Uganda through the porous shared border.

“Some people who became hungry, sneaked into Uganda to get some food. So, when they (Rwandan security) saw them, that’s how some of the shootings came about. Others were maybe trying to get goods from Uganda. They don’t allow any goods from Uganda”.

Miria used to trade in irish potatoes, which are perhaps the biggest agricultural produce in Uganda’s Kabale district. She used to travel to Rwanda three times a week, to sell produce.

“Individually, I no longer take anything to Rwanda. I had some loans with PostBank, but I have failed to service them,” she said.

She also had a wholesale/retail shop at Katuna, for general merchandise. This is where she operated when she wasn’t trading in Rwanda.

The mother narrated the hardship she’s faced with educating her children who are at university. She has two students – one pursuing a Diploma and the other on a Bachelors program – at Kyambogo University in Uganda’s capital, Kampala.

With business taking a plunge, Miria has been forced to write to the tax body (URA) notifying them to deactivate her TIN Number. This is the identification Number issued by URA to prospective taxpayers to enable them meet their tax obligations. It enables business owners to import or export goods, claim tax benefits that accrue to them, access bank loans, process land transactions and acquire access from any government agency.

“At the moment, I don’t have any business. I even wrote to URA to deactivate my TIN Number, because if you don’t do that, they continue assuming you will file your returns which isn’t the case now”.

At crossroads, Miria has opted for farming as an alternative to generate some income. However, the toll climate change is taking on the sector is yet another huddle, she says, citing the unpredictable rain patterns.

“We used to know that this is the season for sunshine but now it’s raining often. So farming has become difficult too”.

If this is what Miria has had to contend with despite her status as a leader, educated and exposed, one can only imagine the price the less privileged individual Ugandans and Rwandans have had to pay.

The diplomatic strife has affected not just the traders but ordinary citizens especially on the Rwandan side where consumers have had to pay an extra 320 Rwandan Francs for a kilo of maize since the closure of the border when the Kigali government restricted importation of Ugandan maize.

Uganda exported 10 times more than what it imported from Rwanda with exports reaching USD 260m annually in 2018 (11 percent of Rwanda’s total imports) just before the border closure.

Asked what she would tell the Ugandan President given an opportunity, Miria says “I would tell my good President to come and maybe give some soft loans through our Cooperative or compensation to us business community who lost business”

“The merchandise we bought got expired because we were thinking opening would happen shortly, but now it has taken long. So we hoarded our goods and at the end of it all, they got expired,” she said.

While many hoped the talks between Presidents Yoweri Museveni and Paul Kagame in Katuna last month would result into the reopening of the Katuna border, outcomes from the discussions indicated this is far from happening.

The opening of the border will be determined by the outcomes of a verification process of claims raised by Rwanda regarding Uganda’s alleged involvement with elements that Rwanda considers hostile. Uganda denies any involvement.

However, February talks in Katuna recommended that Uganda should within one month verify the allegations made by Rwanda about actions from its (Uganda’s) territory by forces considered hostile to the government of Rwanda.

“If these allegations are proved, the Ugandan government will take all measures to stop it and prevent it from happening again”.

According to the outcomes from the meeting, the said actions shall be verified and confirmed by the adhoc Ministerial committee for the implementation of the Memorandum of Understanding of Luanda. 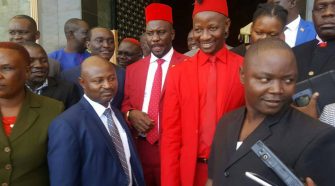