GOMA – At least twenty civilians and 5 Congolese army soldiers were killed on Saturday night by members of the Allied Democratic Forces (ADF) rebels, in the restive eastern Democratic Republic of Congo, the army spokesperson said on Sunday.

The attack took place from 18:30 to past midnight and many people were displaced by the fighting.

During the attack, 25 civilians and soldiers were injured as the army battled the attackers. The army said it was still pursuing the enemy on Sunday.

More than 100 militias operate in North Kivu and Ituri Provinces in the eastern Congo, in a country battling to contain the Ebola outbreak, which is concentrated in the North and Ituri province.

The insecurity is making the work of health workers difficult to quell the Ebola outbreak in eastern Democratic Republic of Congo that has killed 97 people since it began on August 1.

Eastern Congo is plagued by dozens of armed militias that attack locals and exploit minerals.

Congo, Africa’s biggest copper producer and the world’s largest source of cobalt, is preparing to  hold presidential elections in December this year. 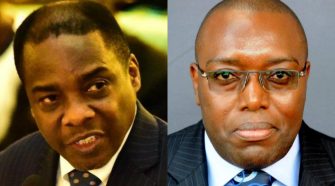