Kyadondo East MP, Robert Kyagulanyi Ssentamu alias Bobi Wine has for the first time responded to critics, over claims that he lacks basic economic competencies to manage the country.

Bobi Wine has been mocked by several Ugandans on social media especially sworn and stalwart supporters of Dr Kizza Besigye and President Yoweri Museveni since his appearance on NTV’s ‘On The Spot’ show on Thursday.

His critics say he failed to respond to simple questions on how he will fix the country’s economy in the event that he became President of Uganda.

During the show, Bobi Wine was asked what kind of fiscal tools he would use to stop inflation. His response was that he would stop impunity citing the recent incident in which Uganda’s Ambassador to Burundi, Maj Gen Matayo Kyaligonza allegedly slapped a traffic officer. Bobi Wine also said he would in his first 100 days ban the tax on the use of social media.

Bebe Cool, a fellow musician and NRM supporter posted on social media that: “Happy women’s day to you all but Mr. Kamara (TV host) you wont go to heaven because the GDP is of the OTT certainly because impunity kyaligonza economy’s freedom young people.”

Andrew Mwenda wrote on twitter that: “This is the real tragedy of African elites. They continually complain that the problem of Africa is bad leaders. Yet when given a chance to select leaders, they chose ignorant and idiotic characters.”

Now, while quoting Theodore Roosevelt in a Facebook post, Bobi Wine says being bashed by a section of the “intellectual” class is not fair and that they are better off advising him instead.

“It is not the critic who counts; not the man who points out how the strong man stumbles, or where the doer of deeds could have done them better. The credit belongs to the man who is actually in the arena, whose face is marred by dust and sweat and blood; who strives valiantly; who errs, who comes short again and again, because there is no effort without error and shortcoming; but who does actually strive to do the deeds; who knows great enthusiasms, the great devotions; who spends himself in a worthy cause; who at the best knows in the end the triumph of high achievement, and who at the worst, if he fails, at least fails while daring greatly, so that his place shall never be with those cold and timid souls who neither know victory nor defeat,” said Theodore Roosevelt as quoted by Wine.

The youthful legislator adds that: “We have some work cut out for us. If we do not want to rise to the occasion and save our nation, let us be slow in criticising those who are sacrificing everything, including potentially their life, to do that work. We can guide and advise, without beating them down.”

Bobi Wine used the same show to affirm that his name will appear on in 2021 contesting for Presidency.

Last week, a group of youths chanting ‘People Power’ stormed CBS radio in Mengo where Kizza Besigye had been hosted for a talkshow, demanding that he (Besigye) supports and gives way to Bobi Wine in 2021, part of which may explain why FDC supporters are bitter with the lawmaker.

Some of Bobi Wine’s supporters have been defending him on social media questioning the rationale of bashing Wine for his “shallow” understanding of economic policies yet the same President Museveni who is said to be well versed in that aspect has presided over an economy whose growth has been sluggish for many years. 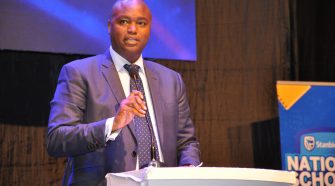