The embattled Forum for Democratic Change (FDC) candidate for Kaabong Woman Member of Parliament (MP) by-election, Judith Adyeke has rubbished allegations by the party that she was bribed with Shs 1.2bn by President Yoweri Museveni to withdraw her candidature.

Addressing the media on Monday, the FDC Spokesperson, Ibrahim Semujju Nganda noted that the party has received unconfirmed reports that Adyeke held a secret meeting with President Museveni in Moroto were she was given Shs1.2bn and promised a job so as to allow the NRM candidate have a smooth win.

In a telephone interview with SoftPower News, Adyeke expressed disappointment that her party would make such a big allegation even after they (FDC) denied her the support she needed to win the race for the party.

In his address to the media, Semujju noted that the party had received reports that Adyeke had started behaving strangely and when they tried looking for her, she had switched off her phones.

“Anyway, I made my decision and I have a right to do so, those people (FDC leadership) know the challenges and what is on the ground. The whole of last week I was making calls to those people and they could not help me, it is now their time to call me,” Adyeke said.

Adyeke noted that her problems with the party began when she began to associate with the ‘People Power’ camp in Kaabong district.

She said that despite the several appeals for support from the party headquarters, she received no positive response. She says she was openly told by the party president, Patrick Amuriat that the party was not comfortable with the close links she had with the ‘People Power’ coordinators.

“The party President Amuriat called me on Friday but I had already made my decision; you cannot send me to the field without any financial support, I only received Shs 500,000 on the day of nomination on 28th August and up to now, I have never received any money from them, whenever you call them, they simply toss you here and there,” Adyeke said.

She added that, “They keep telling you to wait yet the NRM candidates are pouring money in the campaigns. They haven’t given me any money for campaigns, I am even using the old posters of 2016 which is so shaming.”

She had been told she would receive posters and she sent the picture to the FDC Chief Administrative Officer (CAO) but claims that to this day, she hasn’t received response.

“I kept calling them but they keep telling you to wait, I am tired.”

Adyeke said that the major reasons to her withdrawal are the lack of support from her mother political party.

Asked why she didn’t remain in the race having got support from the People Power, Judith said she couldn’t continue receiving support from a different organization without support from her mother party yet her victory would be celebrated by FDC.

On the allegations that she was bribed by Museveni, Adyeke said that it is so unfortunate that such blackmail is coming from her political party.

Adyeke noted that she has never met Museveni in all her life and that the last time she saw him in a distance was in 2017 when he had come for a certain event in the area. 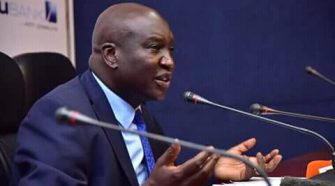