On Friday evening, draws for the final Africa Cup of Nations tournament to be hosted by Egypt from June 21 to July 19, were held in Cairo.

The 24 qualified nations were drawn in six groups, with Uganda in Group A alongside hosts Egypt, Zimbabwe and DR Congo.

Let’s have a closer look into the nations in group A.

The Cranes of Uganda have appeared 6 times at the continental competition since 1962.

They have never won the competition and their best performance was runners-up in 1978. Uganda is making its second consecutive return to the AFCON after ending the 39 years of absence in 2017 due to failure to qualify. They are ranked 79 in the world by FIFA.

They are managed by French Coach, Sebastian Desabre and the captain of the team is Dennis Masinde Onyango.

The player to look out for is Mamelodi Sundowns goalkeeper Denis Onyango who has spent over a decade with the team was in the previous tournament voted as the best player based in Africa by CAF. Cranes was also selected as the best team of the year.

Known as the The Pharaohs, Egypt is the most successful national team in Africa, having won the Africa Cup of Nations a record seven times. Egypt has appeared 24 times in AFCON and 3 times in World Cup.

According to the most recent FIFA rankings, Egypt in 57th in the world and 8th in Africa.The Pharaohs nearly won the 2017 tournament in Gabon when they registered a slim defeat against Cameroon.

The will open this year tournament against Zimbabwe.

Zimbabwe’s national football team is coached by Sunday Chidzambwa and its Captain is Knowledge Musona. They have never played in the World Cup final tournament, but featured thrice in the AFCON tourney. The first time they qualified for their first Africa Cup of Nations was in 2004.

They are ranked 19th in Africa and 110th in the World.

Known as The Leopards, DR Congo’s national football team is coached by Florent Ibengé and its Captain is Youssouf Mulumbu.

They have appeared 18 times in AFCON and only one in the world cup. The Leopards are ranked 46th in the World and 5th in Africa. 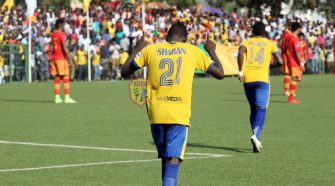