Played at the Cairo International Stadium, the game started with no pressure from both sides and by the 10 minute mark of the game, no goal attempt had been made by any side.

At the 12th minute, Cedric Bakambo latched on to a precise defence-splitting pass and drilled a nice strike from a promising distance towards the middle of the goal.

Denis Masinde Onyango however had a clear sight of it and made a comfortable save.

But, five minutes later Kaddu found the back of the net off a corner kick giving Uganda a lead at a 15th minute mark before he (Kaddu) jumped for another cross in the goal area and produced a fine header which went narrowly wide of the left post.

In the 19th minute, Khalid Aucho made a yard for himself and went for goal from long range, but it unfortunately never troubled the Congolese goalkeeper as it fell into the stands.

Paul Mpoku superbly won the ball back and had a go from distance, but sent his effort high over the bar in 23rd minute.

A cross from Khalid Aucho (Uganda) failed to reach the box as the Congolese defence cleared the ball away to safety pushing the ball out of play and Uganda was awarded a corner kick which did not yield any good.

Farouk Miya could was visibly conquering the middle of the park with marvelous and spectacular turns and dribbling most of the time of the first half.

At the start of the second half, Farouk Miya sent the ball in which Emmanuel Okwi managed to jump highest near the penalty spot and planted a bullet header into the top right corner, giving Uganda their second goal.

In the 59th minute,
Merveille Bope Bokadi created himself some space in front of goal and connected with the resulting free kick but his header is slightly mistimed and sailed inches wide of the left post. The ball went out of play and Uganda was awarded a goal kick.

In the 75th minute, Sebastien Desabre decided to make a change bringing in Allan Kyambadde in place of Patrick Kaddu.

Second goal scorer, Emmanuel Okwi made a yard for himself in 90th minute inside the box after an accurate pass and took a shot that went just over the crossbar before end the game with Uganda in the driving seat, making it their first win at AFCON finals since 1978.

Cranes now top group A with 3 points tied with Egypt which yesterday edged Zimbabwe 1-0 in the opening game of the tournament.

They will play their next game against Zimbabwe on June 26th at 8pm.

Coach Sebastian Desabre’s men are appearing at the tournament for the second consecutive time after an absence of 39 years without making it through. They only managed a one all draw against Mali in the last tournament in Gabon. 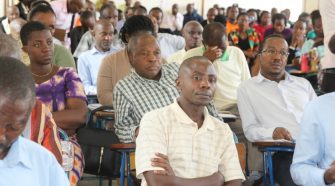