The Uganda Cubs have Wednesday thumped hosts Tanzania 3-0 in the ongoing U17 Africa Cup of Nations tournament in Dar es Salaam, Tanzania.

From the onset, the boys looked aggressive and hungry for the goal, when they dominated possession with a number of attacks, resulting into several shots on goal.

Uganda’s first goal came from Andrew Kawooya when he tapped a cross from Nagib Yiga in the 15th minute, sending the hundreds of Tanzania’s home fans into sheer silence.

After nearly 10 minutes, a beautiful assist from Rogers Mugisha was smartly tapped by Ivan Asaba outside the box in the 27th minute, ending the first stanza with Uganda in a lead.

Najib Yiga, who assisted in the first score couldn’t settle without seeing his name on the scoreboard, when he netted the third for Kwesi’s side in the 75th minute. He headed a short pass from Thomas Kakaire.

This is Uganda’s first win in the tournament after losing 1-0 to Angola in their opener.

Uganda is in in group A alongside Nigeria, Angola and Tanzania. Nigeria has already qualified to the semi finals and for the U17 World Cup after beating Tanzania in their opening game and later Angola.

Nigeria tops the group with 6 points, followed by Uganda and Angola both with 3 points. Hosts Tanzania sit bottom with no any point.

Uganda’s next game will be against Nigeria.

This is the 13th edition of this tournament and Uganda is playing at the finals for the first time in their history.

Four teams out of the eight currently playing finals, which will reach the semi finals will represent Africa in the FIFA 2019 U17 World Cup in Brazil, South America.

The tournament which started on April 14th will end on April 28. 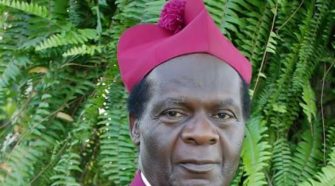