Cape Town – Irene Muloni, the Minister of Energy and Mineral Development, has revealed that 90 percent of Uganda’s energy mix is from renewable sources.

“There is vast potential for renewable energy sources from the various water bodies in the country,” she said.

The Minister was speaking during a Ministerial Panel at the 26th Africa Oil Week (AOW) 2019 in Cape Town, where energy Ministers from Uganda, Ghana, Mali, Cote d’Ivoire, the Democratic Republic of Congo and Rwanda discussed national hydrocarbon strategies.

Uganda’s strategy, she said, is to optimize the investment benefits from the petroleum sector in order to develop durable sustainable infrastructure and acquire technology that will facilitate investment in renewable sources of energy among others.

The Africa Oil Week brings together a wide network of global oil and gas operators, contractors and Governments in Africa. Twenty five Ministers and close to 1500 delegates from over 250 countries were in attendance.

The Minister also used the forum to invite companies to bid for the 5 highly prospective blocks; Avivi, Omuka, Kasurubani, Turaco and Ngaji in the ongoing second licensing round which was announced in May, 2019.

This was during the Uganda National Showcase, which was held on the sidelines of the Africa Oil Week.

The deadline for responding the Request for Qualification for the Second Licensing Round is on December 31, 2019.

“The entire Albertine basin is de-risked, some of these five blocks neighbor the other development projects (Tilenga and Kingfisher), and the support infrastructure, making them highly lucrative,” she said.

Uganda is looking to increase the country’s resources with, 90% of the Albertine basin currently unlicensed.

Preliminary exploration work in other basins is also ongoing, and an oil seep has been encountered by the Ministry’s technical teams in the Moroto Kadam basin, providing evidence of a working petroleum system.

The road to first oil

Government and the International Oil Companies (IOCs) are striving to fast track the processes to first oil.

The Minister said: “Tullow’s planned firm down to raise funds to reinvest in the sector is appreciated. Government has intervened to resolve the standoff, in order to fast track the achievement of the Final Investment Decision by the end of the first quarter of 2020”.

Uganda together with joint venture partners are working to ensure that the development and production stage of discovered commercial is expedited.

Key milestones on the road to first oil have been achieved. These include, the establishment of institutional framework, legislation and the conclusion of key the Front End and Engineering Designs (FEED) and the Environment and Social Assessment (ESIA studies).

Uganda’s strategy for attracting funding for the oil projects is focused on project financing.

“UNOC on behalf of the Government of Uganda is a shareholder in the Upstream developments and, both the refinery (40%) and the East African Crude Oil Pipeline (15%) projects that have a capital requirement of US$ 3.5 billion each,”  Gilbert Kamuntu, the Chief Commercial Officer UNOC revealed.

On local content development, the Minister revealed that government in partnership with the private sector has undertaken capacity building initiatives and enterprise enhancements to ensure optimal participation by Ugandans.

“The laws are a deliberate effort to build the capacity of the private sector along the entire petroleum value chain”.

Provision of local content is part of the policies and laws governing the sector. Sixteen opportunities have been ringfenced for Ugandan enterprises.

Peninah Aheebwa, the Director Technical Support Services from the Petroleum Authority of Uganda (PAU) highlighted what the country wants to achieve in terms of local content in the oil and gas sector. This was during the African Local Content Forum that was held during the AOW 2019.

“The government has clearly defined what the value created within the country should be,” she said.

Initiatives like in-country accreditation and certification of Ugandans is ongoing.

At least 700 technicians have so far been trained and certified internationally and 200 government staff have been trained in different technical skills to effectively handle the oil and gas sector.

Together with the private sector, enterprise development is ongoing to enhance the capacity of SMEs to take part in the petroleum value chain.

So far, Uganda has made 21 discoveries, with 88% drilling rate, 6bn barrels of which 1.4bn barrels are recoverable. Nine production licenses has been issued to Total E&P, CNOOC Uganda Limited and Tullow Uganda. Three (3) exploration licenses were issued to Oranto Petroleum Limited and Armor Energy. 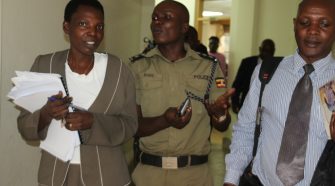