African tax administrators are calling for a shift in policy measures that will make it possible to tax the digital economy, arguing most of the African countries are losing huge sums of money to foreign based-companies doing business digitally in Africa.

They say the current policies require for a company to have a physical footprint in the resident jurisdiction for it to be taxed, however with companies that operate virtually, this is impossible.

This was the outstanding concern as the 4th International Conference on Tax in Africa (ICTA) opened in Kampala on Tuesday. The conference is happening at the same the African Tax Administration Forum (ATAF) is marking 10 years.

It is estimated that Africa loses USD 50bn annually and about 70 percent of this is in commercial business transactions, especially in the extractive industry.

Babatunde Fowler, the Chairman of Nigeria’s Federal Inland Revenue Service (FIRS) who doubles as Chairman of the ATAF Council said this can only be addressed through changes in tax policies and administration.

Uganda’s Commissioner General, Doris Akol said the digital services such Jumia, Google Ads and Facebook which foreign yet earn a lot of profits locally continue to pose a great challenge for developing countries which lack the capacity to tax such businesses.

“We have not registered commensurate revenue collection from this because our policies have not equally adapted to the changing environment,” Akol said.

“For instance, for one to be assessed for tax, they must have a physical address. This is a prerequisite that does not tally with digital economies because they operate mostly online and they barely have a physical footprint and yet they register huge sales”.

The three-day conference seeks to devise innovative ways to deal with the fast rising digital economy as well as ways through which Africa can harness technology to improve tax systems.

In explaining the surge in digital economy on the continent, Logan Wort, the Executive Secretary of ATAF, said that this is evidenced by the growing trend in the use of mobile technology as well as the internet.

In Kenya alone, mobile cash transactions stood at USD 38.5bn in the year 2018, according to Central Bank of Kenya, a 10% increase from 2017. Latest data shows a correlation in the uptake of mobile phones and that of social media on the continent.

Up to 69 percent of Africans (139 million people) used Facebook in 2018 and 95 percent of these accessed the social platform using mobile phones. GSM estimates that by 2020, mobile phone users will hit 1 billion, Sub Saharan Africa alone expected to have 500 million mobile phone subscribers.

“The mobile industry therefore has an important role to play in Africa’s GDP contributing up to USD 110bn by 2020,” Wort said.

“Digitization continues to provide the impetus for countries to examine and reexamine both their economic positions and interrogate whether they are obtaining their fair share of taxes,” he added.

Uganda’s Finance Minister, Matia Kasaija too echoed the concerns, terming the speed at which digitalization is evolving as “a big challenge which some of us will not know how to handle”.
“In terms of taxation, it’s a real challenge. I’m told hotels are digitally booked and digitally paid. Recently, there is an animal called cryptocurrency. An animal that nobody – State or banks – has control over,” Kasaija said.

The Minister proposed an international body with a regulatory mandate over the mode of operation of such unconventional payment systems.

However, President Museveni while responding to the Minister’s remarks insisted it is possible to trace transactions facilitated through the internet. 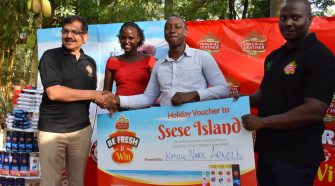