Heads of intelligence and security agencies from across the African continent are convening in Kampala to discuss the link between negative forces and the threat of terrorism.

The Committee of Intelligence and Security Services of Africa hosted by Uganda’s External Security Organisation opened on Monday at Pearl of Africa hotel in Kampala.

Intelligence and security chiefs from 12 African countries will be discussing key security issues relating to the theme “Armed groups and negative forces and their nexus to terrorism”.

Speaking at the opening, the Executive Secretary of the Committee of Intelligence and Security Services of Africa, Mr. Shimeles W.Semaya said that the choice of the theme is derived from Uganda’s experience with the challenge of negative forces.

“The theme of the workshop has been well chosen and is relevant to the region,” Semaya said.

On his part, the Director General of External Security Organisation of Uganda, Amb. Joseph Ocwet noted that the conference will be a good opportunity to share views and experiences in order to find ways forward on how to maintain security in the region.

The Deputy UPDF Chief of Defence Forces (CDF) Lt. Gen Wilson Mbadi said the conference is timely to the African continent and international community to discuss challenges of the region and also perfect delivery of peace to the African people.

He cited urgent need for African intelligence to guide the political wing on how to effectively deal with emerging security challenges especially armed groups.

“The government of Uganda takes this opportunity to extend it’s appreciation to the Committee of Intelligence and Security Services of Africa (CISSA) for its continued support towards ensuring peace on the African continent,” Mbadi said. 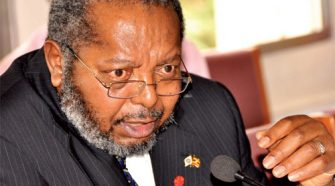