A meeting of African Heads of State convened by the African Union (AU) Chairman, President Paul Kagame of Rwanda, has asked that the Presidential election results in the DRC be delayed until an AU delegation has interacted with the stakeholders in the impasse to forge a solution.

The African leaders observed that there were “serious doubts on the conformity of the provisional results”, as proclaimed by the DRC Electoral Commission, CENI.

The resolution was a result of a high-level consultative meeting of Heads of State and Government held Thursday at the AU headquarters in Addis Ababa, Ethiopia.

Thursday’s meeting had been convened by the AU Chairman, President Kagame, to exchange views on the situation in the Democratic Republic of the Congo (DRC) in the wake of the presidential, national and provincial legislative elections of December 30 last year and agree on a way forward.

A joint communique issued after the meeting stated that the initiative “is part of the African-led efforts, in the spirit of continental solidarity, to assist the DRC political stakeholders and people to successfully conclude the electoral process and preserve peace and stability in their country”.

The meeting was also attended by representatives from SADC, the ICGLR, ECCAS, ECOWAS, IGAD, EAC, the African members of the UN Security Council, the AU troika, as well as by the Chairperson of the AU Commission.

The leaders had been briefed on the electoral process in the DRC and subsequent developments by the Deputy Prime Minister and Minister of Foreign Affairs of the DRC.

“Accordingly, the Heads of State and Government called for the suspension of the proclamation of the final results of the elections,” adds the communique.

In DRC, the delegation will interact with all Congolese stakeholders “with the view to reaching a consensus on a way out of the post-electoral crisis in the country”.

The Addis meeting has also urged all concerned actors in the DRC to interact positively with the high-level African delegation in the interest of their country and its people.

The African leaders reiterated AU’s determination to continue to accompany the people of the DRC in this process.

The meeting also received updates from the Chairpersons of the ICGLR, SADC and the AU Commission, and had in-depth exchanges of views thereafter.

A week ago, Congo’s Electoral Commission declared in its provisional result, Felix Tshisekedi, an opposition candidate, as the winner of the December 30 Presidential election.

However, the result was disputed by Martin Fayulu, another opposition candidate, as well as the Catholic church. The church said the result declared by CENI was contrary to what its (Church) large network of election observers had observed during the poll.

The church says its data places Tshisekedi in second place with 19%.

Fayulu who claims he polled 59.4% has since filed an election petition in court contesting the result, alleging fraud and other election irregularities.

The constitutional body has eight days from when Fayulu’s appeal was lodged on January 11 to rule on the matter. If the constitutional court rules in the favor of Tshisekendi, Congo will for the first time see a peaceful transfer of power since it gained independence in 1960.

Southern African Development Community (SADC) and the International Conference of the Great Lakes Region, have called for a recount of the vote.

The decision reached in Addis on Thursday comes at a time when observers and the international community were beginning to question the stand of the continental bloc, AU, on the dispute in DRC. Many said it was critical that the AU intervenes before the situation degenerates into another violent conflict. 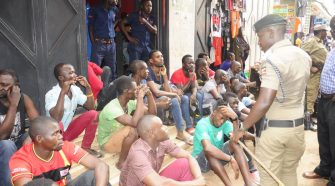