It seems Jackie Chandiru, meant every word when she revealed during a TV imterview this week that she is back to the music arena.

Formerly with all-girl band, Blu*3, before they each pursued solo careers, Jackie has taken a couple of years off the music scene. At some point, photos of a slim and unhealthy looking Jackie made rounds on social media, before establishing that she had been checked and admitted into a rehab.

On Thursday, she made her first TV interview and clarified that her troubles had stemmed from a prescription drug that she had been using for her back problem, which in a long run resulted into her health complications.

She said she did not suffer from any other disease and that she has never used drugs like cocaine and marijuana as some media reports had indicated.

Chandiru however said that she was back on to her feet and promised a blast from a revived musician, leaving many music lovers speculating on what her immediate step would be.

On Saturday, the songstress opened a Twitter account, presumably, to keep in touch with her fans and guess what, in one of her first tweets, she revealed that she was set to premiere a new song. This revelation sparked excitement among the her followers on Twitter.

In her maiden tweet, she wrote: “It took time, it took practice, it took love and God’s grace to get me here. I look forward to connecting with all my friends, family and fans on Twitter”.

Her new song ‘Mi Ora Ku’ was premiered on Saturday night while she appeared on weekly music show SNMS on Radio City.

The response from the fans who kept showering her with welcome tweets, creates an impression that indeed, she has been missed. Others assured her of a successful 2019.

Below is some of the feedback she got from Twitter

Iam Muhumuzack: “My 2019 most anticipated come back is by @jackiechandirug this woman used to run me nuts and my sure she is coming back stronger #spreadthelove”

Dejay Shark: “@jackiechandirug welcome back jackie we missed you and we are ready to support you all the way much love happy nu year the golden voice #uganda_rises”

Super Nasser: “This is the best news I’ve received so far. Can’t wait to hear her vocals murder a track again. @jackiechandirug welcome back”.

Pretty Precious: “I like @jackiechandirug she’s been through a very dark place and we’re all happy she made it to the other side”.

Please Ugandans, triggers are real, let’s not in a few months bully this lady into relapse or depression. Keep the same energy you’re having now. Waiting for the music”

Solomon Ayebare: “Knowing that @jackiechandirug is back is so far the best news I’ve received in 2019. It’s from her song “agaasi” that I realized that music is a universal language. To date, I still enjoy overdose, take it off(with urban boys), going on, gold digger…… etc She’s back”

Jackie Chandiru is the voice behind songs like Agaasi, Gold digger, Wotuuse, Champion but those of her days with Lilian Mbabazi and Cinderella Sanyu while in Blu*3, also seem to have remained much in the minds of the fans, who kept asking her whether there shall come a time when the three will put up a song together again. 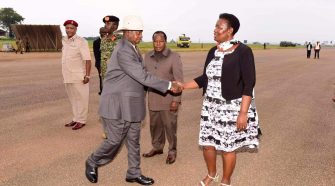 Museveni Departs for Angola Summit on Regional Security, Kagame and Tshisekedi to Attend