The 21st Ordinary meeting of the Summit of East African Community (EAC) Heads of State earlier scheduled for Arusha-Tanzania on November 30, will not take place.

The announcement has Monday been made by Rwanda’s State Minister in charge of East African Community, Olivier Nduhungirehe in a letter to the regional group’s Secretary General, Libérat Mfumkeko. President Paul Kagame of Rwanda is the current Chairperson of the East African Community top organ, a position that mandates his country to schedule the date and oversee the summit sitting.

On October 24, Mfumkeko wrote to Kigali asking them to fulfill their obligation of scheduling the summit, but in response, Rwanda has instead pushed it to an unknown date in the beginning of next year on claims that one of the member states (not mentioned) requested the postponement.

“I have the honour to both inform and request you to notify partner States that the above mentioned Summit has been postponed to a later date in January or February 2020 due to a request by a member of the Summit. A new date will be communicated later after consultations between the EAC Heads of State,” reads Nduhungirehe’s letter in parts.

He however says that the meetings of the Senior Officials, Coordination Committee and the 39th Council of Ministers as well as the Business and Investment Summit will take place as initially planned.

The postponement by Rwanda on effecting this Summit is another contradiction in the country’s leadership, since President Kagame while addressing the media in Kigali on November 8, confirmed that the Arusha Summit will take place. He had been asked to explain why several EAC meetings were not taking place.

He said: “The lack of meetings that you have said should not be an indication of any problem, the problems are somewhere else, not because the meeting has not taken place. The problems are these ones I am talking about which happen or may not happen whether you have had as many meetings as the number of months in the year, but the meeting will happen and it has all along been designed. In fact the officials designed it to be there once in a year.”

Commentators anticipate that the reason Rwanda is giving for the postponement is unconvincing since the particular country said to have requested for it is not indicated. They say that instead Rwanda’s frosty relations with a number of EAC members could be the cause, due to fears of embarrassment that would result from no shows on the part of EAC Heads of State or a deep seated fear that Heads of State of the other East African countries may take Rwanda on, on several bilateral crises the country is involved in with majority of East African counterparts.

It should be remembered that the Summit was last year postponed twice after Burundi pulled.out, accusing Kagame of scheming to overthrow the Pierre Nkurunziza government. It was alleged that Kagame masterminded the attempted and thwarted coup on Nkurunziza as the latter attended an East African Heads of State Summit in Tanzania. Rwanda consistently denies interfering and backing any rebels from Burundi.

In February, Rwanda closed the Katuna main border with Uganda. While the initial justification given by Rwanda for the closure was road rehabilitation, President Kagame later revealed it was political. It remains closed to date and Rwandan nationals are blocked by their authorities from crossing to Uganda by road.

Last week, Kagame said the illegal detention of Rwandan nationals by authorities in Uganda explains why the border still remains closed.
However, Kagame has not stopped Rwandans from to traveling to Uganda by air on the country’s national airline, Rwanda Air.

Uganda has repeatedly denied the allegations of illegal detention of Rwandan nationals and harboring elements considered hostile by Rwanda. It is not clear why President Kagame is not bother by Rwandans who fly into Uganda by air or whether Uganda which hosts thousands of Rwandans is only allegedly unsafe for Rwandans who travel into Uganda by road. Rwanda Defence Forces (RDF) have on several occassions shot at Rwandans who cross into Uganda for food through the shared porous countryside border. Commentators on the Rwanda – Uganda crisis wonder why RDF has to shoot at its citizens to “protect” them from Uganda or why Rwandans continue to move into Uganda against their country’s military – enforced advisory against travel to Uganda.

Meanwhile on the agenda of the aborted Summit, the leaders were expected to review a report on the integration of a fragile South Sudan and consider progress on the verification exercise for the admission of Somalia into the bloc.

The regional leaders were expected to cement their support for Kenya’s pursuit for a non-permanent seat at the United Nations Security Council.

The admission of DR Congo into the bloc was also meant to be on the table after it made a formal application in June this year, but all these now hang in a balance. 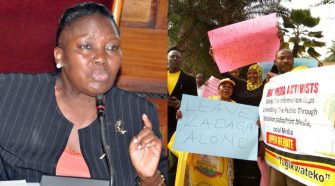 Kadaga Denies Mobilizing Protesters Who Defended Her at Court