She says the different parties should meet their costs.

“I dismiss the consolidated appeal and the parties will bear their costs. I affirm the decision of the constitutional court,” she said on Thursday.

Justice Arach was the first on the bench to deliver her judgement out of the seven Supreme Court Justices, pending the decision by the rest of her colleagues at a session which is still ongoing at the Supreme Court in Kololo, Kampala.

Three appellants in this appeal are challenging the decision of the Constitutional Court which upheld the amendment of the Constitution by Parliament to remove the upper age cap of the presidential candidates initially at 75 years.

Supreme Court is today answering eight key questions which include;

Issue one: Whether the Constitutional Court erred on the application of the basic structure doctrine.

Issue two: Whether the majority justices of the Constitutional Court erred in holding that the entire process of conceptualising, debating and enactment of Constitution (Amendment) Act 2018 that removed the presidential age limit from the Constitution did not contravene the 1995 Constitution and Rules of Procedure of Parliament.

Issue four: Whether the Justices of the Constitutional Court erred in law when they applied the substantiality test in determining the petition.

Issue five: Whether the learned Justices of the Constitutional Court erred when they held that the removal of the age limit for the President was not inconsistent with the Constitution.

Issue six: Whether the Constitutional Court was wrong in holding that the president elected in 2016 is not liable to vacate office upon attaining the age of 75.

Issue seven: (a) Whether the justices of the Constitutional Court derogated the appellants’ right to a fair hearing, un-judiciously exercised their discretion and committed the alleged procedural irregularities.

(b) If so, what is the effect on the decision of the court?

Issue eight: What remedies are available to the parties?

On issue number seven, Justice Amoko, said: “This allegation is unfair to the Constitutional Court. ‘As soon as possible’ depends on the workload and schedule taking in to consideration resource allocation from the government.”

In their petitions, the appellants had argued that the Speaker of Parliament had smuggled the constitutional amendment bill on the order paper when actually it was not earlier communicated. But Arach said the Speaker, as the custodian of the rules of procedure, acted within her jurisdiction.

“On the issue that the Magyezi bill was smuggled on to the order paper, the Speaker acted with in her discretion and powers to determine the order of the business in the house,” she said.

She also sided with respondents ruling that the constitution court did not take away people’s powers of choosing leaders through the periodic elections.

On the violence which ensued at Parliament when Parliament scrapped the age caps, Justice Arach agreed with the constitutional court that violence was caused by the legislators themselves as lack of decorum on their part. She however noted that whereas security services were justified in ejecting them from Parliament, the force used was not justified.

“A Private Member’s Bill cannot introduce charges on the Consolidated Fund, by way of the referendum it imposes,” she added.

She says blocking members of the public from Parliament when the debate was ongoing was okay as long as the MPs who are mandated to amend the law were not blocked, adding that those who claim were barred from Parliamentary proceedings should provide evidence.

She advised legislators who claim to have been beaten or tortured to seek remedy from the High Court.

She also said determination of qualification for Presidential candidates does not amount to altering basic structure of the constitution. So, changing age limit didn’t require the people and thus, MPs acted properly within their powers.

Meanwhile, Justine Eldad Mwanguhya is now giving his verdict on the matter, and later the rest of the justices including the Chief Justice, Bart Katureebe, will also give their judgement. 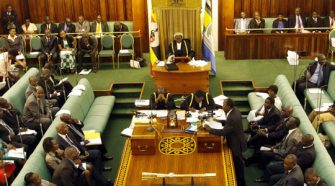