A tense political atmosphere erupted on Sunday during the requiem mass of former Minister Dr. Abel Rwendeire in Rubanda district when the Government Chief Whip Ruth Nankabirwa encountered opposition on the ongoing Age Limit debate. Mourners at the mass booed Nankabirwa after she spoke in support of the Bill seeking to remove the constitutional Presidential age limit of 75.

If the Bill is enacted, incumbent President Yoweri Museveni now aged 73 will be eligible to extend his rule to a sixth 5-year term in office come 2021.

Fr. Gaetano is a strong critic of government who has several times challenged President Museveni’s administration.

In his remarks, Rev. Fr. Agaba thanked Fr. Gaetano Batanyenda for championing the message to the public against the amendment of Article 102 (b) on the Presidential age limit.

However, when Ruth Nankabirwa took to the platform, she campaigned for the removal of the age restrictions for a President to “work until God calls them”.

“Fr. Gaetano, I was with you in the Constituency Assembly. I do still remember your vigilance….. We know the genesis of the provisions of the constitution,” she said.

“I myself don’t spend sleepless nights over Article 102 (b). God sorted that long time ago, just lift it and we work until God calls us. Not so?” she asked.

It is at this point that a section of the mourners responded in disagreement with the Chief Whip’s stance.

Later, Fr. Gaetano told journalists that he was glad that people outrightly demonstrated their opposition towards the amendment.

“I am happy. You saw the reaction of the people. The people said No! No! No! The constitution should not be touched. I was so happy,” the vocal cleric said.

“You see the problem is – they tell lies to Museveni that everything is okay. People in the villages thank Museveni for what he has done but they want him to rest in peace and be the father of the nation,” Fr. Gaetano added.

Nankabirwa is not the first supporter of the age limit amendment to meet such opposition in the public. In Koboko district, Minister Evelyne Anite met similar protests on Independence day celebrations while State Minister of Tourism also Mityana North MP Godfrey Kiwanda Suubi and Mityana Woman MP, survived angry youths in Kiyoganyi town in Mityana who wanted to hurl stones stones at them during a consultation meeting in Mityana.

Kabula MP James Kakooza too survived being lynched by mourners in Lyantonde for supporting the scrapping of the presidential age limit. 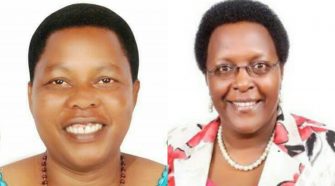