Members of Parliament on the Legal and Parliamentary Affairs Committee who are opposed to the removal of Presidential age limits have vowed to snub the scheduled meeting with President Yoweri Museveni.

The legislators, led by Mathias Mpuuga, Theodere Sekikubo and Medard Ssegona have noted that they have discovered a scheme by government to use illegal procedures in order to amend the constitution.

They said that in their preparatory meetings, it was agreed that the members would meet and consult with voters in the four regions of the country to their surprise, the committee Chairperson told them that there is no money for the regional consultations.

“The Chairperson, Jacob Oboth Oboth is now turning to be an appendage of the scheme to illegally amend the constitution,” MP Mpuuga said.

He wondered how government managed to facilitate over 400 MPs for consultations on the Age Limit Bill, but has failed to get money to fund consultations by the Committee within the four regions.

Oboth told committee members that they would not be able to go for the regional consultations but rather, they would meet the President and later set off for a retreat to come up with the final report of the committee.

Mpuuga said that the meeting with the President is in bad faith, adding that they won’t be party to it.

“We understand that the committee report has already been drafted and only awaits a few conclusions, and it is all in favor of President Museveni. Let members know that this won’t be the only report to be tabled, we shall not be party to that and we shall write our own reports,” Mpuuga said.

Sekikubo observed that the members will as well object to the new members who were recently added to the committee to take any decisions concerning the Bill.

“We know their scheme of adding new members to the committee and this is aimed at increasing the majority of members to sign the report,” Sekikubo said.

“These members, some of whom have not even made their maiden speech are now being added to the committee. We shall object to it. These have not even attended to any witnesses, how can they be used to make final decisions within the committee,” Sekikubo said.

The legislators advised the committee chairperson to rethink the decision of holding a retreat to draft a report while several of members are out of the country.

“A total of seven MPs are out of the country in Tanzania on official duties, the chairperson should at least have waited for them before engaging in a final retreat which as well comes in bad faith,” Mpuuga said. 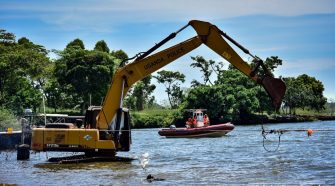