Lawyer Male Mabirizi has Monday rushed to the High Court where he filed an application to compel the Chief Justice to explain why it has taken long for Supreme Court to deliver its ruling on the appeal against the age limit judgement by the Constitutional Court in July last year.

According to Mabirizi, Supreme Court ought to have delivered its judgement within sixty days since January, when hearing of the matter was done.

On Monday afternoon, the Deputy Registrar, wrote to the appellants and respondents informing them that judgement on the Matt had been fixed for Thursday April 18 at 10am.

In a telephone interview with SoftPower News, Mabirizi said, despite fixing Thursday for delivering judgement, his application seeking an explanation for the delay, still stands.

“In their judgement, I expect that maybe they explain why they did not give that judgement within the 60 days, otherwise if they don’t, then my application will remain at the High Court and I will compel him (Chief Justice) to give me reasons why it (ruling) was not delivered within time because justice delayed is justice denied,” Mabirizi said.

“This has to be a litmus test for the entire country that people suffer from Court of Appeal at every level where judges and magistrates hear cases and they don’t decide them,” he added.

He said that towards the end of last month, he warned the Chief Justice that he would be compelled to ran to the East African Court Justice or even the African Court of Human Rights.

“You can not say that the country has rule of law and upholds human rights when it can not even give fair hearing which entails not only hearing cases, but also determining them within the reasonable time,” he added.

Earlier, Solomon Muyita, the Judiciary spokesperson had dismissed any claims of delayed judgement, saying “that is politics, the judgement is within the required time.”

However, Mabirizi insists that paragraph 6.2 of the Judicial Code of Ethics of Uganda which were made in 2003, states that when judgement is not delivered there and then, it must then be delivered within 60 days.

“So, this is not politics. It is law, their own code of conduct, only that they have been keeping people in the sand, they don’t mention that, with an intention of making people believe that judgments have no laws regulating them”.

“But every system has laws regulating it, even Parliament has a time frame within which it makes decisions,” he told SoftPower on Monday

In December 2017, Parliament MPs voted overwhelmingly to remove the age limit of 75 for presidential candidates.

The move was however challenged in the constitutional Court by petitioners Lawyer Male Mabirizi, six members of parliament from the opposition and the Uganda Law Society saying it contravened the supreme law. Court instead upheld the removal of the Presidential age limit.

The fifth judge, Kenneth Kakuru differed with the judgment of his colleagues, saying the age limit was scrapped illegally because the voters who are vested with the powers to amend the constitution were never consulted nor allowed to participate in the exercise.

But, the petitioners represented by lawyers Erias Lukwago, Ladislaus Rwakafuuzi, Dan Wandera Ogalo and Male Mabirizi who is representing himself, were not satisfied with the ruling and ran to the supreme court arguing that there were irregularities in the conceptualisation and passing of the Constitution (Amendment) (No.2) Bill, 2017, which paved way for scrapping the age limit from the constitution.

In their application, the appellants noted that the irregularities included violence exhibited at parliament, which resulted into the suspension and assault of legislators.

The appellants noted that the preamble of the constitution of Uganda talks about the principles of unity, equality, democracy and social justice amongst other pillars was never observed by Parliament. 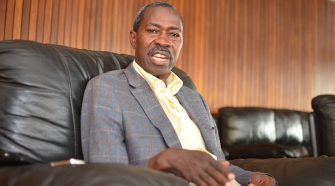