The Ministry of Agriculture is seeking Shs 5 billion to deal with what is says is an imminent locust invasion following an outbreak of swarms of desert locusts in neighboring Kenya.

The revelation was made Friday by Aggrey Bagiire, the Minister of State for Agriculture, Animal Industry and Fisheries.

The second half of last year recorded unusually high rains in most parts of Eastern Africa that had not been seen in many years. These rains incidentally fell also in the semi-arid traditional Desert Locusts (Schistocerca gregaria) breeding ecological areas of Sudan, Ethiopia, Eritrea and Somalia. It is these favorable conditions that facilitated further locusts breeding, multiplication and spread in to Kenya.

The Locusts invaded North Eastern Kenyan County of Mandera by December 2019. Currently by (9th January,2020) they have spread to the 6 Counties of Mandera, Marsabit, Wajir, Garissa, Meru and Isiolo. The Kenyan government working with DLCOEA and partners has instituted control operations to suppress the population and stop further spread.

The Minister said that since the current control capacity is limited, some of the swarms could move further Western into Turkan county, probably by Mid January 2020, with likely potential and risk that some swarms could spill over into the North Eastern region of Uganda, particularly Karamoja region (borders Turkana County).

Bagiire said that the Ministry of Agriculture has communicated to Office of the Prime Minister on the imminent locust invasions and requested Ministry of Finance for provision of a contingency fund of Shs 5bn.

These funds will cater for aircraft fuel (aircraft to be provided by DLCO EA), pesticides for control, provide for ground spray equipment and spray teams and to continuously create awareness to the population in case of an invasion.

“The Ministry has alerted all the districts in Karamoja and entire Eastern Region to be on the look out and the public to report immediately to the nearest Extension Staff in case of any strange grasshoppers detected in their areas,” Bagiire told reporters.

He appealed to the public not to panic, saying government is now vigilant and following up developments and control efforts in Kenya.

“In case of any outbreak, we are ready to handle it”.

Uganda is a member of the Desert Locust Control Organization for Eastern Africa (DLCO EA) and is currently closely working and sharing information on the current status of the desert Locust in the Region.

According to the Minister, a technical team of 2 officers have been assigned to travel to Kenya (Wajir and Marsabit counties) to understudy the current Locust control operations to subsequently share experiences and support the control efforts in Uganda (in case of any outbreak).

Meanwhile the Agriculture Ministry has also made a request of USD 5m from Finance to make good of the arrears on Annual contributions to DLCO EA.

Desert Locust (Schistocerca gregaria) is a species of short- horned grasshopper family. It is characterized by its nature of high mobility (migratory) and broad spectrum feeding habits

Locust swarms vary from less than one km2   to several hundred km2. There can be at least 40 to 80 million locusts in each km2 of swarm.

Coupled with its amazing ability to build up and multiply to colossal numbers, a locust can eat its own weight in fresh food (about 2 gm/day). Half million locusts weigh about 1 ton and they can eat about 1 ton of food enough to feed 2500 people 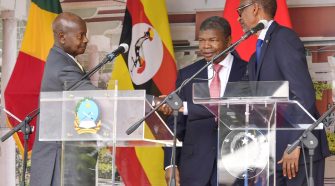