In a commendable charitable act, Senior Police officer, Assistant Inspector General of Police (AIGP) Asan Kasingye on Monday saved a mother who had just given birth on a street in the Kampala city centre.

Kasingye who is the Police Chief Political Commissar says the incident happened at around 4:30pm near the Social Security House along Jinja Road in the heart of Kampala.

He had been driving from Mukono towards the city centre to do some shopping when he came across a huge crowd.

According to Kasingye’s account, a boda boda could not help the mother.

The crowd made several attempts to stop the vehicles for assistance but with no success.

On Monday night, Kasingye had tweeted that he would Tuesday check on the mother and baby and also pay their hospital bills. He as well said he would reunite her with family.

Will tomorrow check on her, pay hospital bills & reunite her with family. Thank God that she didn’t collapse in the car to excessive bleeding. Thx to the nurses that I called & were waiting. She was stabilized, & her little child got some clothing. Motorists, let’s save lives. https://t.co/IbSs1SfoT7

“Thank God that she didn’t collapse in the car to excessive bleeding. Thanks to the nurses that I called and were waiting. She was stabilized, & her little child got some clothing,” the Police officer wrote in a tweet.

He has called on motorists to engage in acts that save lives.

On Tuesday, he posted a photo of him seated next to the woman and holding the baby in his hands. 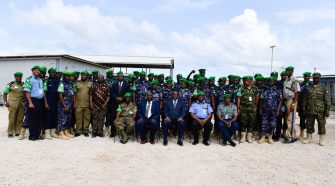