Police has condemned what it called acts of hooliganism that resulted into the loss of a life following chaos that broke out on Sunday during a football match between Buddu and Mawokota in the ongoing Amasaza Cup football tournament.

The incident occurred in Mpigi district. The Police spokesperson, CP Fred Enanga said the fans of Buddu attacked the referee in protest of a decision he took to award a penalty to Mawokota, prompting attacks amongst the fans of the two sides. As a result, several people sustained injuries and one person died.

“They started uprooting poles that had been erected as fence of the pitch. However the Police working with sister agencies managed to rescue the referee together with the players and we transferred them to our Mpigi police station,” Enanga said.

Police estimates the total number of the fans that had gathered at the Mpigi police grounds to watch the game to be 15,000.

According to Enanga, one of the fans named Robert Kabirye attacked a security officer who was armed with a gun. A scuffle ensued and in the process, the security officer discharged a bullet which injured Kabirye in the thigh.

He together with 3 other people who were injured were rushed to a health facility named Double Cure Medical Centre. The other injured persons have been identified as Sebambe Muhammad, Walusimbi Faisal, Nassali Sarah and Nakindi Florence.

“The sad note of it is that when the health centre was rushing Robert Kabirye from Mpigi to Mulago, the fans of Buddu hijacked the ambulance and decided to divert its route from Mulago to Masaka,” Enanga said.

Along the way, Kabirye succumbed to the injuries and died.

“You can imagine this level of hooliganism by football fans. They are trying to save somebody, rushing him to the nearest referral hospital, and then you are bringing in incidents like these of playing with the life of an individual”.

Enanga says Police has instituted inquiries into the matter with an aim of apprehending those involved in the rowdy acts. He said Police will use the available footage to identify the individual fans who were responsible for the fracas.

“Even those who hijacked the ambulance, we are going to ensure that we bring them to book for this kind of conduct,” Enanga told the press. 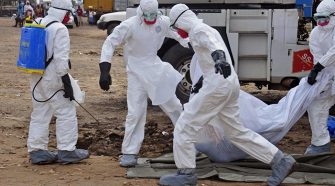