On Wednesday, the different political parties that form the Inter-party Organization for Dialogue (IPOD) met for a landmark political summit but Uganda’s biggest opposition party (FDC) did not participate, sparking criticism from among others President Yoweri Museveni.

On the platform upfront, where the four Principals sat, an empty seat, meant for the FDC representatives spoke volumes of the task ahead in some of Uganda’s unresolved political questions.

In his opening remarks, UPC President, Jimmy Akena who doubles as the Chairman of the summit said that despite FDC’s absence at the event, the party was still a member of IPOD. He said their absence was related with FDC’s freedoms of assembly which they say government have curtailed in recent weeks.

Museveni would later slam the FDC for shunning dialogue yet they profess to be democratic. He said that a political entity that absconds from such a dialogue misses out on an opportunity to have its concerns understood better.

But it turns out that there was more to FDC’s absence than just the curtailment of their rights and freedoms, according to a letter by FDC President, Patrick Oboi Amuriat which he wrote to the IPOD Executive Secretary a week to the summit.

In the December 5 letter, Amuriat lists reasons why the FDC had taken a decision to stay out of the summit.

“I acknowledge with thanks the receipt of your letter dated 9th November 2018 that we received on 26th November 2018, inviting the party President for the above activity on 12th December 2018. As you are aware, FDC signed a memorandum of understanding as an IPOD participating member and remains committed to dialogue,” the FDC President wrote.

He however noted that there was no adequate time for the participating political parties to exhaustively discuss the four thematic areas which formed the agenda of the summit.

“The four thematic areas to define the agenda for the period 22019-2021 need thorough discussion with participating parties and the IPOD council prior to the summit. It is therefore our considered view that there is inadequate time for us to discuss and agree on the four thematic areas stated in your letter, before meeting of 12th December, 2018,” Amuriat said.

He further stated that FDC believed in a Summit “that should ratify the decisions from the different political parties”, but not one “that will spend time in detailed discussions which should be the role of the various party institutions and the IPOD Council”.

Another bone of contention for the FDC were issues touching on the constitution and electoral reforms. The FDC President said that the party had no assurances based on the conduct exhibited previously by government, that the reforms required would be implemented.

“Some of the thematic areas cited like enacting Constitutional and Electoral reforms were previously discussed and agreed upon in the Uganda Citizens’ Compact on Free and Fair Elections but have since not been implemented by the ruling NRM government. We therefore wonder what has changed to guarantee future compliance to resolutions of IPOD”.

On the issue of suppression of rights, FDC cited recent events where party members including Amuriat and former party President, Dr Kiiza Besigye have been stopped from attending party activities.

Amuriat told IPOD summit organizers that FDC was “troubled by the current political environment across the country, especially towards us that does not offer a conducive environment for FDC to actively participate in the summit”.

“Abuse of human rights, stopping the FDC party activities in Kasese, Rukungiri and Mbarara, and the tormenting of our leaders by the relevant authorities are some of the issues that need to be put in order without any further delay,” Amuriat added in his letter.

He said that the issues relating to suppression require no discussion in order for them to be resolved.

“In the view of the above concerns therefore, as one of the political parties in IPOD, we wish to inform you that we will not be participating in the IPOD summit scheduled to take place on 12th December as we believe it will not achieve its purpose. We will be available to discuss if our concerns are addressed”.

Commenting on the concern (on curtailment of freedom of assembly) which was also raised by JEEMA’s Asuman Basalirwa, President Museveni said that his government would not tolerate anarchy propagated by opposition politicians. He said that his government has a duty to protect the ordinary Ugandans especially the traders whose property is vandalized whenever opposition rallies turn violent.

“As for Association of freedoms as raised by Hon. Asuman Basalirwa, there is no problem in people assembling, the only problem we have is that some people decide to assemble in markets where people are selling their products. It is not correct to have one leg in constitutional conduct and another in unconstitutional conduct, government has got a duty to protect the property of Ugandans,” Museveni said.

He alao said that opposition parties seeking to hold rallies must abide by Public Order Management Act by choosing appropriate venues, explaining their motive for the rally. He said government was aware that some of the elements in the opposition plan to use such rallies as a trigger for overthrowing the government like it happened in the Arab Spring. 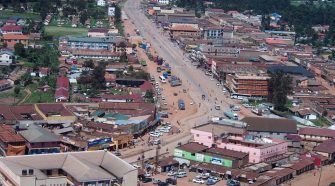