The newly elected Forum for Democratic Change (FDC) President, Patrick Oboi Amuriat has been sworn in to office, committing to unite Uganda’s biggest opposition party to eliminate the “dictatorship” by defiance.

FDC leaders and supporters converged at the party headquarters in Najjanankumbi on Friday morning to witness the handover and swearing in ceremony. It was presided over by the FDC Electoral Commission Chairman Dan Mugarura.

Amuriat Oboi arrived after his predecessor and was accompanied by his wife and supporters.

In his speech before handing over tools of office to his successor, Muntu reiterated that he was handing over an intact party to Amuriat but was quick to caution him of the “difficult position” he has taken over.

“We had a very ferocious election I must admit, but we are mature enough to handle whatever issues that were going on,” he said.

Muntu was FDC President since 2012.

He told Amuriat that “you are entering a very difficult position but I will give you advice and I will be there”, and warned him to be careful about some of the people he will work with.

Muntu challenged the party to do some soul searching if it is to be able to cause the change that it has been advocating for.

“We must start to build within us what we want for this country. The bible say you reap what you sow,” Muntu said.

But Amuriat used his inaugural speech to assure the party that he will deliver it into government through “defiance”.

“We can not continue to massage the dictator, we shall eliminate the dictatorship by defiance,” the new FDC President promised.

He alsi revealed plans to form a committee that will ensure reconciliation and harmonization of the party’s internal differences and to address issues by aggrieved members like Mugisha Muntu. 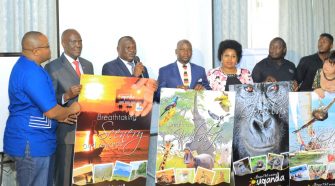