A mother and her child in the Northern district of Amuru are hospitalized and nursing wounds after they were shot by a Police officer.

SoftPower News understands that the victim identified as Akech Jennifer, 36, got shot in the abdomen and the bullet protruded, hitting the foot of her young daughter, Agenorwot Gifty who was on her back.

Jimmy Patrick Okema, the Police spokesperson for Aswa Region told this website that the incident occurred after an angry mob stormed Atiak Police post demanding for the head of the driver who had knocked dead a five-year-old child.

According to Okema, the driver of a Kenyan vehicle Reg KDR 363P was accused by the mob of knocking dead a pupil named Emmanuel, a pupil at Mary of Mother of God Primary School.

He further revealed that attempts to calm the rowdy crowd were unsuccessful which prompted Police to fire tear gas and live bullets.

“It is reported that the crowd started throwing stones at Police on duty thus the scuffle,” Okema told this website on phone.

It is during this chaos that a stray bullet hit Akech and her child. The two were rushed to St. Mary’s Hospital Lacor where they are being treated.

Okema who visited the duo in the hospital with the Aswa Regional Police Commander Emutu Ezekiel, confirmed the patients are out of danger.

The aggrieved locals are said to have overpowered the Police before a reinforcement of both Police and the military was brought in from Pabbo and Babia. 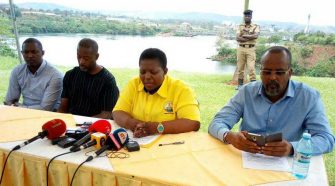 NRM Vow to Challenge Mwiru’s Election in Courts Of Law