The Minister of Finance, Planning and Economic Development, Matia Kasaija says that given the current situation, the projection for economic growth in FY 2019/20 has been revised downwards from 6 percent to between 5.2 and 5.7 percent depending on the severity of the COVID-19 impact on Uganda.

This, he noted in a statement to Parliament on the Economic impact of COVID-19 on Uganda which was found lacking by legislators.

Kasaija said the biggest impact of the virus will be on the services sector noting that travel restrictions are already affecting the tourism sector including hotels, accommodation and transportation.

“Supply chain disruptions are hampering trade, and this is expected to continue until the virus is contained at the global level. Travel restrictions at the global level will also affect the flow of imports into the country leading to disruption in supply of inputs into the Industry sector which will affect industrial output,” Kasaija said.

The Minister said the low activity in industry and services sectors will result into loss of jobs further leading to a decline in economic growth.

Kasaija as well noted that Worker’s Remittances and Foreign Direct Investments (FDI) will also be affected by the slowdown in the global economy adding that in the last four months of the financial year, FDI and remittances are projected to each decline significantly.

He added that Loan Disbursements are projected to decline by 50 percent in the last five months of the financial year because of the likely delays in projects execution and a disruption in the supply of inputs for the projects.

The Minister observed that in the event that the virus enters Uganda and spreads rapidly (as experienced in some African countries such as Egypt, South Africa and Algeria, the impact on the economy, the budget and the population would be significantly higher than discussed above.

“In this scenario, economic growth for FY2019/2020 would decline to between 4.6 percent and 5.1 percent and an additional 2.6 million Ugandans would be pushed into poverty,” Kasaija added.

Kasaija thus noted that to deal with this economic shock, both fiscal and monetary policy adjustments would be required; the fiscal policies will play a critical role in mitigating the negative impact of the pandemic on economic activity and the challenges in the affected sectors particularly health, while monetary policies will help to reduce the impact of the deterioration of the balance of payments.

“To deal with the possible negative impacts on our balance of payments, the Government will seek support from the International Monetary Fund to support the Central Bank in ensuring that international reserve buffers remain strong and that the exchange rate remains stable”.

However, the legislators noted that the statement by the Minister doesn’t address the concerns of Ugandans as a result of the directives that were issued by the President on Wednesday.

The MPs noted that the Minister was expected to give guidance on how Ugandans shall survive due to the shut down with no incomes, high electricity, water and airtime tariffs, monthly rent payments, financial loans among others.

The Minister requested to be allowed time next week to present a relevant statement to the house. Parliament thus formed a task force that would gather all the views of members to form the response from the Minister next time. 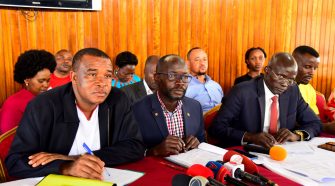