Following renowned music producer, Daddy Andre’s troubles involving a female singer who accused him of sexual harassment, many fans have come out to question why Andre who was in an affair with songstress Angella Katatumba would stoop so low.

Some expressed disappointment that the man whose fame has risen fast in the recent past would not be content with Angella, a beautiful lady from a wealthy family.

Nadia Rania who went public with the allegations against Daddy Andre accused him of pestering her for sex.

She claims Andre has been making physical advances against her will and that he has blackmailed her using a music project on which they collaborated. The producer refused to participate in the video shoot, and instead chose to repeatedly demand for sex, which Nadia said she wasn’t comfortable doing.

Andre denies the allegations. He says the little known artiste is only seeking relevance.

Four other women have since come out to accuse Daddy Andre of inappropriate sexual advances during studio sessions.

Now, Angella Katumba who last year openly revealed she was in a love affair with Daddy Andre has come out to speak about her status with Andre.

Angella says she and Andre parted ways in January. Why? Because he refused to go for an HIV test.

Although she credits him for taking good care of her for the little time they spent together, Angella who is daughter to deceased tycoon Boney Katatumba says her principles were a priority.

“For over three months, Andre treated me like a princess. He spent over 20 Million UGX on me. There is nothing he didn’t do or buy for me and he never let me pay for a thing. He introduced me to all his friends, family, relatives and he even took me to his village,” she wrote on social media.

Things however went South in January when Andre “was burdened with a lot of problems”, Angella said, including financial and many others.

“Andre’s former PA stole his money and his car and to make matters worse, I also left him in January, because he completely refused to do the HIV test,” she added.

“Trust me, this was not an easy decision and I felt horrible, especially after, Andre poured all the love on earth on me. Despite that, I had to stick to my principles. I decided to keep it professional and focus on promoting our music”. 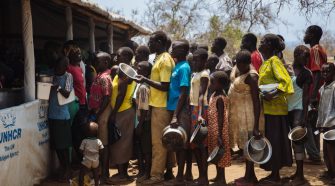