The Minister of State for Privatization and Investment, Evelyn Anite has attacked the media for reporting about the whistleblowers’ call for investigation against her alleged secret trip to Mauritius.

The whistleblower in letters to the IGG and Anti-corruption Unit of State House asked that the IGG investigates reports that Anite secretly traveled to Mauritius on a mission to irregularly seal the deal for a UTL strategic investor.

The whistle blower contends that the motive, timing and nature of Anite’s discreet trip to Mauritius are very suspect given the circumstances surrounding the insolvent UTL.

Addressing the media on Monday morning, the Minister said that such reports of the whistleblower petitioning the IGG is fake news. She singled out online publications – Soft Power News, Insider and Grapevine whom she accused of being bankrolled by the “mafias” against the UTL audit.

She said these outlets have allowed to be used and they must prove whatever they allege.

“This is fake news, the likes of Grapevine, Insider and SoftPower I need to let you know and explain to you, you should not take their money may be get their money, eat but don’t write that rubbish because it will land you and me in the courts of law; because ultimately that is were we are going to meet,” Anite said.

She threatened to sue the said news publications as was the case when the media first made allegations that she had taken a USD 8 million bribe from the government of Mauritius.

Anite said that, “This is fake news, as far as I am concerned, no investigations have been instituted against me, I have not seen the IGG’s letter in fact I am writing to the IGG to invite her to have an investigation on me for doing my job because according to the Whistle blower, I am in touch with Mauritius company.”

The Minister also denied allegations that she has amassed a lot of wealth including properties in Uganda and abroad from the said bribes.

Asked by SoftPower News speak to comment k. whether or not she traveled to Mauritius or not, Anite responded, “SoftPower, why do you care where I go when I am on leave, did you hear that there is a travel ban on me, did you hear that I am not supposed to travel anywhere in the world?”

“I can travel anyway be it Ireland, Mauritius or Europe, mention the country. I have no travel ban at least until now since I am the Minister in charge of investment.”

Anite asked the media to back off noting that, “Whether I have been there, it is not your business; I have classmates with whom I am at Harvard School of Business, they are Ugandans, four of them, that is why I am demanding for the public hearing, I want the IGG to carry out a public hearing that is when we shall answer that question.”

Anite noted that the public hearing will help clear the air on whether she went to Mauritius or not and she will have a chance to present her travel documents and all the details necessary.

In the whistleblower letter, the complainant accuses Minister Anite of influence peddling, abuse of office, corruption and conduct unbecoming of a Minister and Honorable Member of Parliament. 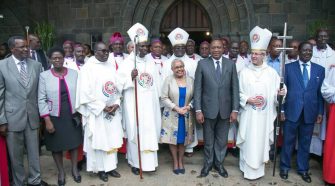