The State Minister for Privatization and Investment, Evelyn Anite, says she has received death threats from a mafia cartel in government over her role in causing an internal audit on activities of the Uganda Telecom Limited (UTL).

The allegations by the Minister follow an order issued by the High Court in Kampala for an audit into the struggling Uganda Telecom (UTL) within 30 days which has since commenced.

The order was issued by Justice Musa Ssekaana upon application by Uganda Broadcasting Corporation (UBC), one of the creditors of UTL.

The court’s order ended a two months standoff between Anite and the UTL Administrator, Bemanya Twebaze, the Secretary to the Treasury, Keith Muhakanizi, the Attorney General’s office on whether UTL should be audited or not.

Anite had contested the proposal by the other government officials that UTL shouldn’t be audited until the Administrator’s term expires in November which has been overturned by the High Court ruling.

The court ruling followed an application filed by the Uganda Broadcasting Corporation (UBC) which is one of the UTL creditors, as the insolvency law demands. It is this legal process that the Minister had sought to circumvent from the start.

In a recent letter responding to the decision by the Secretary to the Treasury, Keith Muhakanizi directing for an audit to he halted, Anite said UBC’s application to court for an audit on UTL was in bad faith.

“I restate that UBC’s application for appointment of another auditor is in bad faith, because the audit process had commenced and the applicant has not advanced any reason why the appointed auditor cannot inform the creditors, government and the public as stakeholders”.

She argued that “it does not matter who audits UTL” but that “the appointed auditor should be capable”. Anite said UBC was being used as a pawn simply because it could not wait for an (illegal) audit to be concluded “since the same is being undertaken by a reputable auditor”.

Later, however, the same Minister sought to take credit for the court’s ruling following UBC application.

“I thank Justice Musa Ssekana for a ruling affirming my demand for auditing UTL and Presidential directive on the same,” Anite tweeted.

“There is authority in this country and no amount of maneuvers can defeat the right and cause for the people of Uganda”.

Now, Anite alleges that the unkwown people are holding meetings at Kampala Club and different offices plotting to kill her.

“There is a cartel that is used to intimidating and robbing this country, they are yet again plotting a move to kill me, they have been holding meetings in various offices, at Kampala club, in the offices of Uganda Registration Services Bureau,” Anite said.

Anite noted that these mafias have put up a group of young people that are tapping her phone all the time.

“They have gone to MTN and got printouts of my communications and what I do, they have been trailing me ”

“I am actually going to report to Police, today I have already called the IGP to report this, these are not just mere allegations, these mafias are not jokers, you go and ask Abiriga, ask late Francis Ayume,” Anite said.

Asked however whether she has reported this matter to Police, the Minister told reporters she hadn’t but she is yet to. 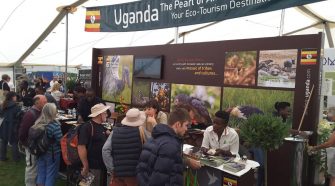