The State Minister for Privatization and Investment, Evelyn Anite has expressed fear that the reported vandalism of UTL copper network cables in the country are aimed at sabotaging investigations and audit into the operations of UTL under administration.

While addressing the media at her office in Kampala, the Minister quoted a report that was sent to a number of technical and political government officials.

“Information received from credible sources indicates that there is ongoing vandalism of UTL Copper network cables in the country. The signal so far points to possible sabotage by elements not happy with the ongoing Government efforts to revive UTL,” Anite quoted the report.

The report adds that besides, there are indications that the copper wires stolen are sold in Kenya where they are re-melted and used to produce various copper products.

The other areas that are equally affected are Entebbe Airport, State House road, Katuna Highway, Kabale, Masindi and Lira towns.

“We have observed that whenever suspects are arrested and detained, some UTL Security Managers are reluctant to follow up the cases to a logical conclusion,” the report reveals.

Anite reemphasized noting that the UTL managers have paid no interest in the cases adding that this speaks to why UTL offices were once set ablaze so as to kill evidence.

The report recommended that the relevant Minister swings into action so as to compel the UTL authorities to take relevant actions.

“I am the relevant Minister until President Museveni takes me away from this docket. I am going to be very relevant to follow these mafias to the logical conclusion; they want by cutting the wires to fail investigations and as well have the company collapsed,” Anite said.

However, sources say the report which is attributed to ISO is fake and was first generated in 2017, before UTL went into Administration.

The same report was published in the Red Pepper tabloid and contained allegations relating to vandalism of the infrastructure.

It should be noted that the problem of vandalism of infrastructure affects not just UTL but other government parastatals such as NWSC, UMEME as well as UNRA.

There are concerns that the Minister is only reviving the fake report to enrich her campaign against the current Administration of UTL. There are also claims that Anite is close to some elements within ISO and that explains why now that Anite has run out of options, she has reverted to the same ‘ISO report’

Meanwhile, this news website has established that UTL has since 2017 made efforts to crack down on the cases of vandalim on its infrastructure. Working with the Police, Inspectorate of Government and DPP, the telco intensified its hunt against vandalizing the network infrastructure.

Information before court that a total of 9 cases have since 2018 been completely determined by different courts of law that include; Mukono, Makindye and the Buganda Road Court and the convictees are serving their sentences.

Those that have so far been convicted with vandalism and other related charges include: Bernard Bwire convicted on May 17, Samuel Mwesigwa convicted on October 18, Joel Alumansi, Umar Niwamanya, Wahab Kakubamundu, Tonny Kiyima among others.

Accordingly, a total of 6 cases of key vandals are currently being prosecuted on courts including Entebbe and Nakawa, against suspects who include; Fredrick Mwambu, Wahab Kakubamundu, Ibrahim Kakabira, Abdul Latif Mugabi, Enock Kasenge and Ben Kasamba. 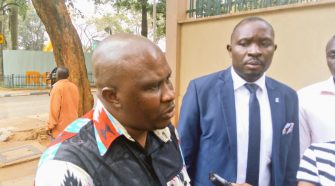