The Anti-corruption Unit has arrested a man alleged to have been disguising himself as one of the personnel attached to the Unit and obtaining money.

The suspect has been identified as Mike Adoko who hails from Lango sub-region. He was arrested and handed over to the military court, according to the Unit.

“Over the past few months, some individuals and groups have come up to impersonate and affiliate themselves as part of our Unit. One of such is an anti corruption activist called Mike Adoko from Lango subregion that was arrested and later handed over to the military court,” the Unit posted on Twitter on Monday.

Adoko is accused of defrauding a headteacher of Shs 6m under false pretence.

The Shs 6m was obtained from the Head Teacher of St. Katherine Secondary School who was promised by Adoko  protection from answering for reports on the emblezzlement of funds amounting to Shs 66m.

The Unit says another group intimidating the Lango sub-region by impersonating as agents of the Anti corruption unit is the Red Army which “extorts money from civil servants”.

The public has been notified that the Anti-corruption Unit has no offices or agents anywhere else in the country. The Unit advises the public to be more vigilant with individuals that impersonate officials from the Unit.

At the end of last month, the State House Unit which is headed by Lt Col Edith Nakalema arrested another man by after he was allegedly found soliciting for a bribe.

Steven Mwembe was soliciting for a bribe worth Shs 3.5m under the guise of speeding up the process of resolving a land dispute.

Mwembe was disguising himself as an official working with the Commission of Inquiry on land matters which is chaired by Lady Justice Catherine Bamugemereire.

In December last year, President Yoweri Museveni launched the Anti-corruption Unit under the Office of the President which will receive and act on complaints relating to corruption. At the launch, Museveni said the Unit is the “missing link” in government’s efforts to weed out corruption which has over the years stalled service delivery.

The Unit has in recent months made several arrests including senior local government officials some of whom have been interdicted. 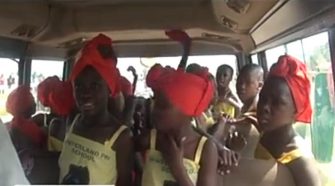