FDC party presidential candidate, Gen Mugisha Muntu has called upon petty members to stop accusing him of appointing the Leader of Opposition in Parliament (LOP) after the contested 2016 General which the party claims to have won.

The decision by the party leadership was seen as a contradiction to the party claim that they won the elections.

Addressing the media in Najjanankumbi, Muntu wondered why the members are accusing him of a decision that was taken by the party and not him as an individual.

Muntu said that this is not the first time the party has taken such a decision noting that in a similar scenario his predecessor Dr. Kiiza Besigye did the same thing.

“In 2006, we believed that we had won the presidential elections and were cheated, the leadership took a decision to go to court to contest the outcome but later decided to appoint the leader of Opposition in Parliament who was Prof. Ogenga Latigo,” Muntu said.

Muntu added that, “again in 2011, we believed we won and were cheated, we chose not to go to court, we asked whether we should go to Parliament as well as choosing a leadership which we agreed upon and Hon. Nandala Mafabi was appointed at that time as the LOP.”

Muntu noted that in 2016 the same thing happened where the party was cheated,  did not chose to go to court but decided to go to parliament as well as forming leadership.

Muntu observed that he respects party organs and could never go against a decision taken by the party organ.

“I want to understand the colleagues who have kept on attacking me personally on that question when it was the organs of the party which made the decision which was not different from the other two times; what is the motive?”

In response, former Kumi County Member of Parliament, Patrick Amuriat noted that the 2016 election was unique from other elections since the group took a deliberate decision to form a ‘peoples’ government’ which is completely different from how they reacted before.

“What we would have expected from the leadership of the party was to own their own resolution of the National Executive Committee (NEC) and be part of this government and not do things that would lead to contradictions.” 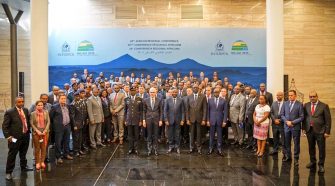