The Archbishop of Church of Uganda, the Most Rev Stanley Ntagali has faulted United Nations (UN) for it attempts to promote promiscuity, gay behaviour as well as their pro-abortion stance in Uganda through Non-governmental Organizations (NGOs).

This is part of the Archbishop’s message to Ugandans ahead of Christmas and the festive season. He delivered the message at a news conference at Namirembe Diocese on Tuesday.

Ntagali said that over the last three years, the Church of Uganda has intentionally focused on promoting the family and children.

He said that during Christmas, Ugandans need to remember that “we are celebrating the birth of a child into a family”.

He however noted that the country is still grappling with serious issues which are affecting families today.

“We also have serious issues from the UN’s pro-promiscuity, pro-gay, and pro-abortion sexual agenda that are trying to infiltrate Uganda,” the Archbishop says.

“Such are sneaking into Uganda through re-writing government policies as well as through UN-funded NGO’s. We continue to say “No” to Comprehensive Sexuality Education and fully support UJCC’s efforts to intervene on this matter”.

While at the helm of the Church of Uganda, Ntagali has maintained a strong stance against homosexuality. He has boycotted several global summits of the Anglican Church over the endorsement by the top church leadership in Canterbury of gay marriages.

On Tuesday, Ntagali also reiterated that the church remains opposed to efforts to legalize abortion.

There is plenty of evidence that demonstrates that legalizing abortion is not a significant factor in reducing maternal mortality, despite the rhetoric we commonly hear, he said.

“Abortion is just another form of child sacrifice and our government should not legalize it”.

He said the transformation of our country begins when individuals and families recognize their only hope has a name, and it is Jesus.

“My fellow Ugandans, our greatest need in Uganda is for another revival – for us to repent of our greed that manifests itself in so many ugly ways, and to be truly born again”.

According to Ntagali, greed and corruption and entitlement and violence can only be driven out of people’s hearts and communities “when we invite Jesus into our hearts”.

He anchored his Christmas message on the famous Biblical verse from John 3.16, “For God so loved the world, that he gave his only begotten Son, that whoever believes in him should not perish but have eternal life.”

By giving his Son, God’s love should be seen as a self-giving love, the Archbishop said.

“It is a sacrificial love. It is a love that costs him something personally”.

He also condemned parents and adults whose greed has led them to shrines to engage in witchcraft that puts children at risk and, even worse, causes children to be sacrificed.

“It was my great joy to join His Excellency the President and other national and religious leaders in the recent Walk against Corruption. So many things in our country could be resolved if corruption disappeared”. 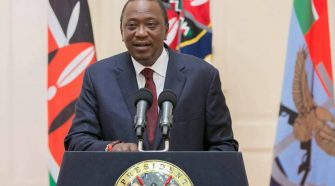