The Archbishop of the Church of Uganda, Rt Rev Stanley Ntagali has used his Easter message to decry the rampant illegal grabbing of church owned land by “powerful” individuals.

Ntagali said that there is a trend of stealing church land by people considered to be well connected who corrupt officials in the land offices to issue illegal titles.

The Archbishop made the comments on Easter Sunday while delivering his sermon at All Saints Cathedral Nakasero in Kampala.

He told the congregation that Easter should be used to celebrate Jesus’ victory over death and to reflect on the symbolism of his death which was intended to bridge the gap between the sinners and God.

“We continue to live in fear and anxiety. There is rampant land grabbing, especially church land. You might not know, but this is a big problem and we don’t have a solution,” Archbishop Ntagali said.

“The rich people who have money go to Entebbe [land’s offices] and get land titles. They bribe lawyers and other people to take land belonging to other people. That’s bad news,” he added.

Ntagali said that widows and the elderly are among those whose land has forcefully been taken.

He also condemned the acts of kidnap and murder that have dominated news headlines in recent weeks and appealed to those behind the acts to repent and work hard.

His message also dwelt on the domestic violence which has created conflict and break ups in families as well as the gross corruption that has deprived the unemployed youth chances of getting jobs on merit.

“Corruption has taken over. People call for job interviews just for formality because policies demand so. But most of the jobs are already given out,” Ntagali lamented, making reference to unqualified people who bribe and use back channels to get jobs.

“The future of the young people is dark,” he said.

Regarding the recent tense relationship between religious and political leadership, Ntagali had the media to fault, saying there is misreporting of comments by the clergy “to create a conflict between us and the [political] leadership”. 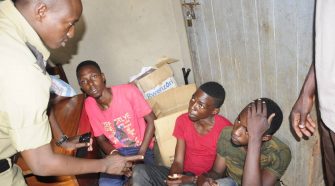