Police in Kampala have Monday morning shot dead an armed robber who was escaping after killing a security guard of a hotel he had gone to rob from in Kiwatule near Kampala.

According to ASP Luke Owoyesigyire, the Kampala Metropolitan Deputy Police spokesperson, the incident occurred in the wee hours of morning when Police embarked on a search after being alerted by the hotel owners.

“There was a murder today morning (Monday) of the security guard Tumwesigye Elias who was guarding at Sala Hotel which is located at Kiwatule road. The murder started as an armed robbery when a man yet to be identified gained access to the building and shot the security guard dead,” Owoyesigyire told reporters who had gathered at the Naguru Police headquarters on Monday.

He says, the hotel management alerted Police which responded swiftly, prompting the robber to escape on realizing that Police had arrived.

“Our teams from Ntinda and Kira road were deployed to intercept him and he was shot dead during an exchange of fire along Kyambogo road,” Owoyesigyire added.

He said Police is investigating the murder and that the two bodies have been taken to Mulago hospital for postmortem.

Preliminary investigations indicate that the gun used in the murder of the security guard was stolen from the Police officer who was guarding Uganda Business and Technical Examinations Board offices in Ntinda in the beginning of this month, Owoyesigyire said.

He said security companies ought to arm their officers saying for the case of the deceased guard, at the time of the attack, he was not in possession of a gun. 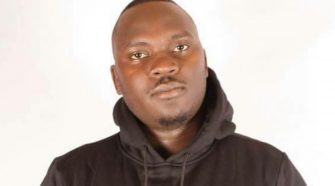