Action will continue being taken against members of the Local Defence Unit (LDUs) who misbehave during the course of their duties, according to the army.

More than 13,000 LDUs were recruited in July this year from districts in Central, Eastern, Northern and Mid-western regions of Uganda on top of the 6,000 LDU personnel who had earlier been recruited.

The creation of LDU was aimed at enhancing the existing foundation security arrangement in the country to ensure the people and their property are secured at grass root levels and helping in fighting urban crime.

But residents of Kampala Metropolitan area where LDUs are already deployed have for months raised complaints about their conduct especially in terms of using excessive force as well as going to the extreme in executing their duties. Many have been accused of brutalising suspects and smashing their identity cards.

However, the army spokesperson, Brig Richard Karemire said that such, are isolated cases and the UPDF doesn’t condone them and will continue holding the individual officers accountable.

“The LDUs fall under the command and control of the UPDF. It is true there have been incidents where individual LDUs have not behaved as explained. We have registered some cases of misconduct and we have quickly responded to a number of them with many of them arrested and punished,” Karemire said.

“It is a process and we will continue to ensure that they take the discipline of the UPDF because discipline is one of the core values that form the character of UPDF. So, action will continue to be taken against any LDU who misbehaves or behaves in a way that is not inline with the code of the UPDF or acts contrary to the expectations,” he added.

Karemire however notes that on a large scale, LDU has done a commendable job in ensuring security and reducing crime.

“The rate of criminality has gone down although it has not been eliminated but we salute the LDU for their input in registering this achievement as well as working with other security agencies in fighting crime,” Karemire said.

LDU recruits receive a 4 months basic military training from UPDF training schools. Upon completion of their training, they are deployed to serve in their respective districts of recruitment. 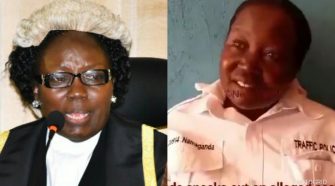