A Portuguese national who was arrested two days ago for marrying a 16-year-old girl has presented a sales agreement signed by the victim’s parents.

Carlos Almeida Da-Costa was picked up on Wednesday after residents of Busibante in Najjera, Kira Municipality tipped Kira division police of the unlawful marriage of a teenager.

Police raided Almeida’s home and found the girl inside his bedroom. He was arrested and taken to Kira division police headquarters.

However, Almeida insisted that he lawfully owned the girl saying he had even signed an agreement with her parents.

Almeida reportedly offered the couple a three-bedroom house in exchange for their daughter.

According to police, the parents told one of their neighbours that they married off their primary 6 daughter because she had “overgrown and no longer fit to be in the primary.”

Enanga said police decided to name and shame the girl’s parents to serve as a lesson to other parents since their conduct is illegal and punishable by law.

Police says the Almeida and the girl’s parents will appear in court. According to the records of Uganda’s Criminal Investigations Directorate (CID) , more than 13,000 girls were defiled in 2019.

Most of the victims were aged between 15 to 17 years. 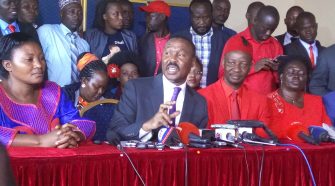