Political analyst Fredrick Golooba Mutebi has noted that the increasing commercialization of politics is due to the lack of a clear political ideology that masses can base on while selecting their leaders.

Golooba noted while speaking at the round table dialogue on the cost of politics in Uganda which was held at Méstil Hotel in Kampala organized by Westminster foundation for Democracy and Netherlands institute for multiparty democracy.

He said the failure to craft messages by some candidates has pushed them to splash money around which has led to voters to start demanding for money irrespective of the message and capability of the candidate.

This followed a report by Alliance for Election Financing Monitoring (ACFIM) with findings that candidates vying for parliamentary seats in the 2021 general elections are likely to spend a minimum of Shs 500m each, to fund their campaigns.

The research findings were revealed by ACFIM Executive Director, Henry Muguzi in a research study dubbed; “Unregulated campaign spending and its impact on electoral participants in Uganda.”

Muguzi revealed that the study showed that electoral financing has been growing since 1996 but this growth turned exponentially in 2005 when Uganda returned to multi party democracy and that most political leaders consider politics as employment.

He noted that as a result, the growth has bred ground for political corruption, weak political accountability and poor service delivery.

The study also revealed that electoral outcomes over the past 3 electoral cycles have not translated into improved livelihood and that voters respond only to money not ideology as well as belief that party flags open economic doors.

Commenting on the developments, the President of the opposition Democratic Party, Norbert Mao refuted claims that political parties lack ideology.

Instead he said there are a number of factors that motivate people to join politics which have led to the increased commercialization of politics.

Mao admitted that indeed citizens have lost trust in their representatives who now believe that they must ask them for money before they vote them into power.

“People want power so that those close to them can benefit. The Professor may be talking of political ideology but if the ordinary people see that the skin of a politician’s wife looks better than it was looking before, this will force them to join politics,” Mao said. 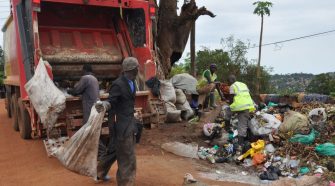